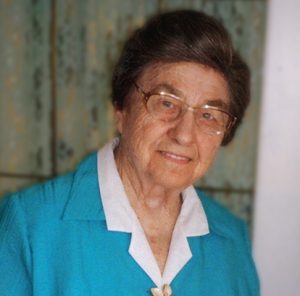 Lydia was born on May 19, 1921 in Mothalen, District of Mohrungen, East Prussia. Her parents were Heinrich and Gottleib Oldach. At the age of 13 she accepted Jesus Christ as her Savior and, upon confession of her faith, was baptized by Pastor Hugo Kellitat in Marienburg. Even as a child she loved her Savior, whom she served faithfully all her life; already at the age of 14, she was active in the church choir and the guitar ensemble, later, she also taught Sunday School for several years.

In 1941, she married Artur Arnold, who was serving in the military at the time. Then some very difficult years followed: In 1944 she received a `Missing in Action` notice from Russia regarding her husband and in 1945 she had to flee from her home with her parents and other siblings. Their flight was stopped in Pommern, as the Russians had caught up with them and they were ordered to do forced labor. Hard years still followed, as they lived under Russian occupation, only her unwavering faith in God helped sustain her during these difficult times. After two years the family decided to flee again, amidst great danger, to try and reach the West but they were unsuccessful and were only able to get as far as Seehousen, Altmark in East Germany. There they found living accommodations and work, as well as a spiritual home at the local Baptist Church. Towards the end of 1949, Lydia was able to be reunited with her husband; that day was one of the happiest days of her life. In 1954, they emigrated to Canada, where they started living and working on a farm in Waldheim, SK. After 6 months they were both able to obtain work and a place to live at the Waldheim Hospital. Lydia became their dietician and cook, having been trained as dietician before the war. Here they settled in and worked until the hospital was closed. In 1959, they moved to Saskatoon, SK and they became charter members of the First German Baptist Church. Lydia was a dedicated leader of the Ladies Aid and enjoyed serving in the church choir and the guitar choir.  Both Lydia and Artur worked at the University of Saskatchewan, Lydia worked as a cook for the next 14 years until they moved to Kelowna, BC in 1973. It was here that Lydia looked after her father and ailing sister for the next 21 years, until each of them passed away. During this time, she still tried to be involved in the work of the church as time permitted. She was happy to help, putting her whole heart into it, because she loved the Lord and wanted to glorify him. Whenever there was a need, she gladly helped out. At the Grace Baptist Church, she led the Ladies Missionary Guild for several years, here too, she was happy to sing in the church choir, and in the guitar choir. Her devotion and witness were expressed by writing poetry, with the prayer that it would be a blessing to those who read it. Besides poetry, caring for her family and helping at the church, Lydia loved gardening; wherever they lived, her gardens were a work of art and enjoyed by many. In her spare time, she also enjoyed painting and doing sketches. Lydia will be dearly missed. Condolences may be sent to the family by visiting www.springfieldfuneralhome.com.