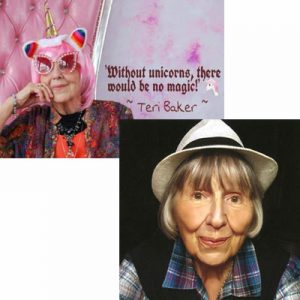 Teri was born in Shoreditch, London, England, the first few years of life being far from picture perfect. She never knew her father (John Moody), and at the tender age of three she was given to her grandmother to be raised. She knew and referred to her own mother as “Auntie”, only finding out who she really was when she was nine years old. Regardless of the lack of affection and disjointed relationships she started out with, Teri grew up to have more love in her little finger than anyone I have ever met and she shared it with the world whenever and however she could.

At age 9 she was evacuated from her home because of the War (WWII). She was fortunate enough to be relocated to Lady Dewar’s Estate where she was schooled by the local nuns. In her group of evacuees, there were children much younger than Teri, and she took them under her wing. She was that kind of person – always helping others! Lady Dewar took Teri under her wing, training her to ride horses competitively. She won several awards, and even entered the local Gym Carners (horse riding championships). Mom loved this time in her life, fostering the love of all living creatures, great and small.

It was at Lady Dewar’s Estate that Teri began writing. It would become her way to escape the sounds and the darkness from the War. She wrote about fairies, pixies, brownies and woodland folk, finding solace in these mystical, magical fantasy worlds. Teri saw the world for its beauty – from the clouds in the sky to the light flickering on the leaves on the trees – and had an incredible ability to bring this beauty to life in written word. Her imagination knew no bounds. One day, as Teri sat gazing out the window, her hands cupping her own little pixie face, a nun stood over her desk and asked, “Angelus, what is so interesting outside?” The tree had caught Teri’s attention as its leaves blew in the wind, and she envisioned little fairies all along the branches, their little wings catching the sunlight as they fluttered in the breeze. Teri, who was being taught to worship from the Bible, dare not say anything about fairies, but answered the nun with, “Angels outside in the tree!”

In 1956 Teri and her then husband moved to Canada to start a new life and raise a family. They ran a children’s toy and pram store in Nanaimo, BC. It was during this time that Teri was able to really embrace and explore her writing. She used an old Underwood typewriter and onion paper. Her creativity seemed to endlessly flow. Her girls would hang on her every word, loving Mom’s stories and thoughts. What a blessing!

Teri eventually divorced and left Canada in the 1970s. She went back home to the UK. Years later she dedicated her time and love to helping raise two of her grandsons (daughter Paula’s boys). They enjoyed countless adventures together, the trio often referred to as “Ma Baker and her boys”. She spoke fondly of their special times spent together. The boys will forever cherish these special memories of their Nan.

Teri later returned to Canada in 1994 where she chose to stay! She then helped raise more of her grandchildren – daughter Jonica’s three kids. These lucky children had their own personal, in-house Storyteller. She made up stories just for them! It goes to show, yet again, her love and dedication to her family. In fact, there were always kids in our home that she treated just like her own, garnering the name ‘Universal Nan’. She also loved to feed everyone and would create her own special designer breads and sandwiches that were later referred to as “Nanwiches”. If you hadn’t had one, you hadn’t lived!

In 2016, Teri was given the opportunity to work with Izabela Bzymek, a renowned illustrator/animator from Vancouver. To see her writing come to life in this way excited Teri to no end. Unfortunately, halfway through this process, Teri was diagnosed with stage four colon cancer and given weeks to live. In October 2017 the cancer clinic in Kelowna told her to prepare for death.

Teri would worry about others, but she never panicked when it came to herself. She knew that she wasn’t ready to go yet…and went on to fully embrace life for the next year, attending book signings at Indigo, new store openings and Women’s Appreciation Day at Staples. She also did a reading at Ronald McDonald House. Teri and her daughter, Jonica, were already aligned with the Michael Cuccione Foundation – a charity that worked to raise awareness and money for the Children’s Hospital and children’s cancer research – and were waiting to have a book published so they could dedicate it to Michael.  Jonica, Teri’s daughter and co-author of Teri’s first book, ‘What if Bunny Poo was Square?’, was also Teri’s marketing and social media manager. She would have her mother dress to play the part at her publicity events – shocking pink wigs, Tutus and unicorn hats…and Teri loved every moment of it. She was the star of the show at the age of 89 years young!

A year later, Teri’s good luck turned. She was subject to a series of hospital stays and her health was really beginning to weaken. She suffered a freak accidental fall and broke three ribs and got a concussion. She was able to return home where her daughter presented her with a book by Deepak Chopra on trauma. Unbelievably, this assisted Teri getting back on her feet, bouncing back a second time. However, more health issues ensued, and Teri couldn’t keep it up. She was determined to spend one more Christmas at home with all of her grandchildren and extended family.  She said it was the most amazing Christmas ever. Her eldest granddaughter bought her an old record player along with records from the 1920s. We all sang along to the music! Yes indeed, it was an amazing memory for us all.  It was just after the New Year that her health really began to decline, and it was as if she knew it was now coming close to the end of her time with us.

Teri called Jonica to come in and see her – she wasn’t feeling A1. Jonica and her youngest daughter walked in to see an empty hospital bed. After Teri returned from X-ray, she was gasping for breath. As painful as it is to recount this moment, it was absolutely a Hollywood ending – Teri passed away with family by her side on January 14, 2019. Giving herself to the very end, she gave us one last smile and squeezed her granddaughter’s hand good-bye. The world lost the funniest, most kind and talented of writer that day. She was dubbed the ‘Poetical Artist’ by Jonica – earning this title because she used her paper as her canvas and her pen as the brush; you could imagine yourself right there in her work.

Teri was a very proud Scorpio, like her grandson Derrick. She loved Numerology and Astrology, possessing many books on the subject. She enjoyed sharing her astrological knowledge with her daughters, family and their friends, telling them of their bright futures and good fortune to come.

There were so many things that Teri was famous for – she was certainly one in a million. Always giving, sincere, supportive and kind; true to herself and to others, a truly beautiful, magical person we will miss so very much!

Forever in our hearts, we love you!

From her eldest daughter Paula, grandsons and family from over the Sea:

You can shed tears that she is gone,

Or you can smile because she has lived.

You can close your eyes and pray that she will come back,

Or open your eyes and see all that she has left.

Your heart can be empty because you can’t see her,

Or you can be full of the love that you shared.

You can turn your back to tomorrow and live yesterday,

Or you can be happy for tomorrow because of yesterday.

You can remember her and only that she is gone,

Or you can cherish her memory and let it live on.

You can cry and close your mind, be empty and turn your back,

Or you can do what she would have wanted –

Smile, open your eyes, love, and go on.

Please visit www.teristalesproductions.com to learn more about Teri, her writing, and her beautiful legacy.