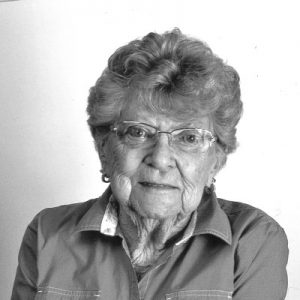 Kay spent her early years in Meadow Lake, SK before moving to Winnipeg where she met her first husband, Robert Mcmillan, with whom she had her three beautiful children. She eventually made her way to BC and ended up in Kelowna in 1960 where the population was a mere 10,000 people. Kay was very active in our community and was one of the first patrons of the Kelowna Recreation Center where she swam five days a week up until the age of 85 years. She had a core group of friends whom accompanied her and they enjoyed frequent luncheons, teas and over the decades their birthdays never went uncelebrated. Kay also had an undying love for animals. She played a crucial role in the building of the Kelowna SPCA, raising much of the funds to get the Casorso Road location established. She trained and showed her own dogs for many years and had numerous trophies and medals which displayed her dedication.

Kay spent endless hours volunteering for the Legion showing her respect for all Veterans. From selling poppies on Remembrance Day to delivering chocolate bars, mints and TV’s in the hospital to those that served to protect our country, she wanted to ensure these people knew how appreciated and special they really were to her. Kay was a social butterfly, always smiling and brought joy to a room as she entered it. Her small stature was deceiving as her heart held an infinite amount of love for so many things.

Kay was predeceased by her husband of over 40 years, Art Beck, her son-in-law Richard Schuck and her granddaughter Cindy Rottenfusser. She leaves behind to mourn her three children Gail Schuck, Judy Kozikowski (George) and Jim Mcmillan (Debbie), her grandchildren Lori, Lisa, Kim, Brad and Kate, many great and great-great grandchildren and of course, her beloved dog Chrissy.

A Celebration of Life will be held Tuesday May 7, 2019 at 1:30 pm at the Royal Canadian Legion, 1380 Bertram Street, Kelowna. In lieu of flowers donations may be made to the Kelowna SPCA in Kay’s memory https://spca.bc.ca/locations/kelowna/.

Send Condolences
Send Flowers or a Sympathy Card
In lieu of flowers donations may be made to the Kelowna SPCA in Kay’s memory Link: www.spca.bc.ca/locations/kelowna


The service for BECK, Kathleen Irene is scheduled for Tuesday May 7, 2019 at 1:30 pm . Below you will find the map for the service location and the contact information should you have any questions.