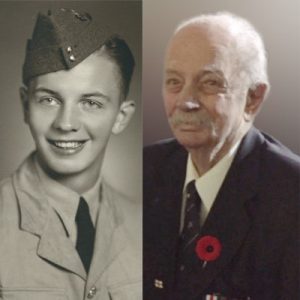 Donald was born on March 7, 1926, in Winchester, Massachusetts, to his Canadian parents, Dr. Samuel and Eva Best. He passed away at the Vernon Jubilee Hospital on April 17, 2019. Don spent his childhood in Massachusetts, but went to Bishops College School, a private high school, in Lennoxville, QC. Immediately following graduation, Don proudly enlisted in the Canadian army (altering his birth certificate to “sneak in” under age) to fight in World War 2. At the end of the war, Don returned to Canada and attended Sir George William College in Montreal (now Concordia University), earning a degree in commerce.

Don married Alice Perry and they had three children: Carolyn, Gwendolyn and Lewis. After this marriage ended, he married Sheilagh Ware. They had three children: Donald, Ann and Robert, Don and Sheilagh remained happily married for nearly 60 years. Don had a successful career in public administration in Montreal, Ottawa, Peterborough and Northern British Columbia. His real passions, though, were pre-Columbian and British History. While living in Kelowna, he proudly lectured on many historical topics at the Society for Learning in retirement. He was also active on the Kelowna Museums Society Board.

Don was predeceased by his son Donald in 1963. He is survived by his children Carolyn (David), Gwendolyn (James), Lewis (Sandra), Ann Dorval (Barry), Robert (Betty), his grandchildren and great grandchildren. The family would like to thank all the Coldstream Meadows staff (past and present) for supporting and caring for our father. Thank you too, to Dr. Elizabeth Jolly and her receptionist, Marianne, for their many years of care toward Dad. A Celebration of Life will be held on Saturday, May 11, at 2:00 pm at Trinity United Church, 3300 Alexis Park Drive Vernon, BC with Reverend Bob Thompson officiating. If you wish to send a condolence, post photos or share a memory, please scroll down the page to the area called “Condolences.”


The service for BEST, Donald Blackwood is scheduled for Saturday, May 11, at 2:00 pm . Below you will find the map for the service location and the contact information should you have any questions.