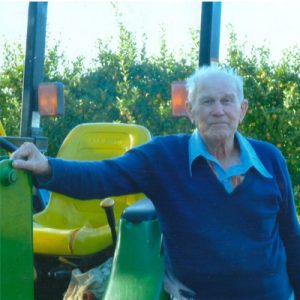 Wilhelmus “Bill” Braam passed away peacefully at the age of 95 on Saturday, November 2, 2019, in Kelowna, British Columbia. Survived by his three sons and their families: Mark & Maureen, and their children Nicole (Tyson) and Michael of Vancouver; Ron & Ela and their son Logan of Burnaby; Francis & Marlene, and their children Spencer, Ethan and Ryan of Kelowna.  He also leaves behind his great-granddaughter Emma and his siblings, brother Theo, and sister Wilhelmien. He was predeceased by his grandson Christopher, his brother Karel, and his sisters Truus, Annie, Let, and Hermien.

Bill was a happy person that always cared about others.  He worked very hard to build a life for his family in Canada.  He was also one of the toughest people we all knew.  No matter what burden he endured, he barely offered a complaint, and soldiered on.

Bill was born November 28, 1923 in Gendringen, the Netherlands (Holland).  He immigrated to Canada in 1953, spending a year on a farm in Saskatchewan before settling in Kelowna, where he married Everdina (“Dini”).

Together they bought an orchard, built a house, and ran the orchard while Bill continued to work at the local sawmill and elsewhere.

Bill loved his children and grandchildren, he took great pride in everything that they did, and often spoke of the legacy he was leaving behind, even if sometimes it seemed he was focused on his orchard.  So great was his drive, stamina, and passion for his orchard, that he worked it until he was 88.  Even in his early retirement one could see that he missed being outside working with his hands.

We will all miss our friend, father, grandfather, and brother, but we know with certainty that we are better for having known him, and the many positive and generous ways that he has influenced our lives.  Goodbye Dad/Grandpa/Bill …

An informal gathering to remember Bill’s life will be held Saturday, November 23, 2019 at 11:00 am, in the Springfield Funeral Home Reception Centre, 2020 Springfield Road, Kelowna, BC.

You were treasured and will always be in our hearts.


The service for BRAAM, Wilhelmus “Bill” is scheduled for Saturday, November 23, 2019 at 11:00 am. Below you will find the map for the service location and the contact information should you have any questions.