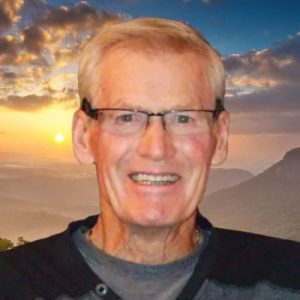 Don passed away peacefully on Wednesday, December 19, 2018 at the age of 74 at Hospice House in Kelowna with his loving wife, Shirley, at his side.  He was born on January 18, 1944 in Flin Flon, MB.  Don was predeceased by his parents, Carl and Catherine, his brothers Gale, Bill, Cal, David and Harl and sister Pat Burton.  Surviving sister is Doris Searle (Russell) in Ontario.  Don started his long career in mining and safety in Flin Flon, then went on to BC and Indonesia before retiring to Kelowna.  Being a selfless man, Don always put his family first.  He will be dearly missed.  His memory will be cherished by his wife Shirley, his children Bob (Cindy), Dan (Marcy), Carol Hunter (Bill), Reagan (Daniel) and Lindsay (Miann).  His eight grandchildren – Alex, Sarena, Tyler, Kyle, Braydon, Casper, Ella and Judah were a great sense of pride and joy to him and he eagerly anticipated their visits and FaceTime.  Don will be missed by his and Shirley’s extended families, friends and golfers at Quail Ridge.  The family will be celebrating Don’s life at a private gathering later.  Memorial donations may be made to the Parkinson’s Foundation.  If you wish to send a condolence, post photos or share a memory, please scroll down the page to the area called “Share Your Condolences.”

Service
The family will be celebrating Don’s life at a private gathering later.

Send Condolences
Send Flowers or a Sympathy Card
Memorial donations may be made to the Parkinson’s Foundation. Link: www.parkinson.org


The service for CHRISTIANSON, M. Donald (Don) is scheduled for The family will be celebrating Don’s life at a private gathering later.. Below you will find the map for the service location and the contact information should you have any questions.