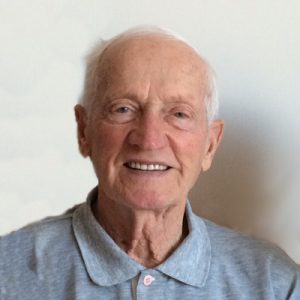 It is with great sadness that we announce the passing of our beloved Ernest Drvaric. He passed away at Kelowna Hospice House on May 18, 2019 at the age of 92 after a lengthy battle with prostate cancer.

Ernest was born in Dolnji Slaveci, Slovenia and escaped the former Yugoslavia in 1956 eventually immigrating to Canada with his family in 1957. Settling for a short time in Marlboro, Alberta he worked for the Canadian National Railway but decided to put his trade as a cabinet maker to use and moved the family to Edmonton, Alberta. He loved to travel, and camping holidays brought him to the Okanagan where the land reminded him of the country of his birth. He and his wife moved to Kelowna in 1973 and in 1975 they built their own home in Lakeview Heights on a ½ acre where they had fruit trees, grapes, a large vegetable garden, made wine and even raised chickens. In 1998 he had the foresight to move to Westbank so they could, in their latter years, be within walking distance of their church, doctor and shopping.

We would like to thank Dr. Bystrom and the nursing staff and volunteers at Kelowna Hospice House for their care and dedication during the last months of his life.

A mass to celebrate Ernest’s life will be held at 11 a.m. on Monday, May 27, 2019 at Our Lady of Lourdes Catholic Church in West Kelowna. Viewing will be made possible 1 hour prior to the service and a reception will be held after the Mass. Ernest will be laid to rest following the Mass at Kelowna Memorial Park Cemetery.  If you wish to send a condolence, post photos or share a memory, please scroll down the page to the area called “Condolences.”

Visitation
A viewing will be made possible 1 hour prior to the service
Our Lady of Lourdes Catholic Church
(2547 Hebert Rd, West Kelowna, BC)

Location
Our Lady of Lourdes Catholic Church in West Kelowna


The service for DRVARIC, Ernest is scheduled for 11 a.m. on Monday, May 27, 2019. Below you will find the map for the service location and the contact information should you have any questions.

Our Lady of Lourdes Catholic Church in West Kelowna