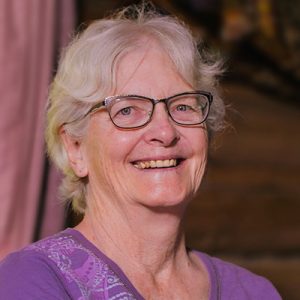 Left behind with love in our hearts are husband Richard, daughters Lisa (Darren) and Shauna (Andrew), and four grandchildren, Julia and Simon Lett, and Benjamin and Mia Royes.  Daughter of Elmer and Marion Pyle, sister of Ian and Gordon, special aunt to her nieces and nephews, and beloved true friend of many.

Born in New Westminster, BC, Sheila grew up in Port Coquitlam, BC, Tranquille, BC, and Kamloops, BC. She met Richard in 1972 while living in Vancouver, BC and they celebrated 46 years of marriage on March 10, 2019. Sheila and Rich lived in Kamloops from 1974 to 1984, then relocated to Kelowna, BC where they lived for the past 35 years.

Sheila worked for many years at BDO in Kelowna and in retirement logged countless volunteer hours with the Telus Ambassadors and Shoe Bank Canada, enjoying sorting shoes with the tight-knit volunteer group.  Sheila treasured time with family and friends, playing cards, traveling, sharing meals and attending the theatre. She delighted in her role as “Grandy” for the past 12 years.

Sheila’s soul lives on at the Forster (Pyle) family cabin on Dominic Lake, BC, her place of relaxation and rejuvenation since childhood.  We are so grateful she was able to enjoy two recent long weekends at the cabin with her husband, daughters and grandchildren.

Sheila will be dearly missed by all who loved her.

A Memorial reception to be held at Springfield Funeral Home, Friday August 16, 2019, 2:00-4:00 pm, 2020 Springfield Road, Kelowna, BC. If you wish to send a condolence, post photos or share a memory, please scroll down the page to the area called “Condolences”.


The service for FORSTER, Sheila Marion is scheduled for Friday August 16, 2019, 2:00-4:00 pm. Below you will find the map for the service location and the contact information should you have any questions.