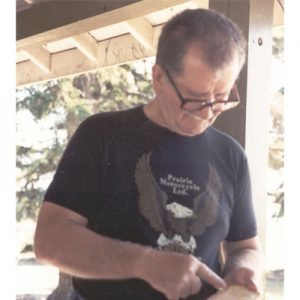 On November 12, 2019, Michael Juba passed away at Cottonwoods Care Center, Kelowna, BC. He was 96. Michael was born on February 15, 1923 in Hubbard, SK and was the 8th child of Annie (nee Borys) and Alex Juba. Along with nine siblings, Michael was raised on the family farm near Kelliher, SK until 1932 when the family moved to Yorkton, SK.

Even as a young boy Michael loved the outdoors, spending time in the bush, camping and often skipping school for a week at a time. Despite the truancy, Michael graduated from Burke School completing grade 8 and launched out on his life, always remaining true to himself.

When Michael was 16, WWII broke out and he was able to convince the recruiting officer that he was old enough to join, but his sister quickly put a stop to that. In May of 1942, Michael enlisted in the Prince Albert Volunteers and became a member of the Canadian Army. He served in Canada, United Kingdom and continental Europe. Michael was a natural mechanic and equipment operator and soon moved up the ranks to Bren Gun Carrier Instructor. On January 7, 1946 Michael was discharged from the army with six medals, and a scar on his forehead where a bullet had grazed him. He returned to civilian life in Yorkton, married Anne Nikota, his wife of 70 years and raised two daughters Carol and Linda.

Michael was a builder, inventor, visionary entrepreneur and businessman. He built, from the ground up, two successful businesses, a furnace installation and repair business in Yorkton and a vacation fishing resort in Northern Saskatchewan on Barrier Lake. The vacation resort on Barrier Lake grew into a hamlet and is known as Barrier Ford, Saskatchewan.

With his kids long gone and now in his 70’s, retirement beckoned. Mike and Anne moved to Kelowna and spent the summers travelling in their motorhome, wherever the road took them.

Michael was truly larger than life itself and touched the hearts of many people. He will be missed by anyone who was lucky enough to know him, but none more than his wife Anne, daughters: Carol (Vanderhoof), Linda (Sorrento); grandkids: Shannon (Regina), Riley (Toronto), Chelsea (Saskatoon) and all five of his great grandkids.