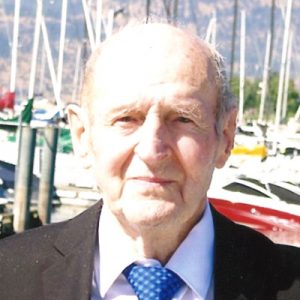 Henry grew up in Duderstadt, Germany, and left on May 27th, 1954, the day after his 23rd birthday, to start a new life in Canada. In February of 1955, he met Inge Kreinbrink, and they married November 26th that same year. While living in Winnipeg, MB, Henry had many adventures as a logger, city bus driver, and top tiered insurance salesman with London Life Insurance to name a few.

They had three children, Gordon, Stephen and later Caroline (born in Kelowna, BC). While still living in Winnipeg, Henry bought the Park Motel in Kelowna and moved the family to BC. In the winters, Henry worked as a carpenter, framing homes and also helped build the snow sheds for the Roger’s Pass. After selling the Park Motel in 1970, Henry worked for over 25 years with the City of Kelowna in the Parks Department, a job he really enjoyed until he retired from the workforce at 63.  He lost his loving wife of 43 years on December 25th, 1998.

Henry loved landscaping and gardening and spent much time in these pursuits; He was also an avid fisherman and a big fan of the Vancouver Canucks! Henry will be deeply missed by his family and by many of those at Cottonwoods with whom he interacted during his final years there.

We are always sad when someone we love dies, but dad seems to have deserted our world in a way that everyone desires; he did not suffer!  Also, his last years were very happy with Olga, his loving companion.  He was always up for a joke, and perhaps he winks at us from afar!

A private family service will be held to celebrate his life and share fond memories. If you wish to send a condolence, post photos or share a memory, please scroll down the page to the area called “Condolences”.