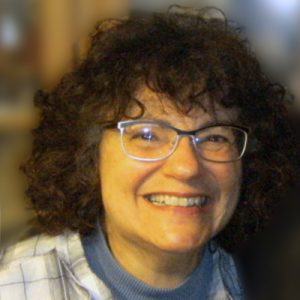 Lori passed away June 17, 2019 in Kelowna at the age of 62.  Lori was born in Vancouver and went to school there, earning a degree in Microbiology from UBC. Her education led to a job in the quality control department at Dairyland, and later at Foremost Foods, where she worked to ensure their highest standards were met. She became a mother to two sons during this time.

In August of 1990, she, her husband and children moved to the Glenrosa area of Westbank and remained there for 9 years. It was here that she took a serious interest in breeding and raising small animals, and she would join the Okanagan Rabbit & Cavy Breeders Association (ORCBA). Over the years, she entered many of her cavies (more commonly known as guinea pigs) in various competitions, winning numerous show ribbons for her efforts. During this time, she worked for CARO Environmental, performing testing and quality control in their water lab.

The family moved across the lake to Kelowna in August of 1999, where she saw her sons established in new schools. She left CARO and began working part-time at Okanagan University College. OUC became UBC Okanagan and she was one of the original employees, starting in the biology department as an animal care technician and finishing as a Lab Tech 5. At the university, she was in charge of the greenhouse and saltwater tanks, among a multitude of other responsibilities she was proud to make her own.

As a lifelong animal lover, she was a strong supporter of the Kelowna SPCA and their work with animals in need.

As another hobby, she spent much of her time tending to her garden, growing both flowers and vegetables. Her family benefitted greatly by always having fresh greens and tomatoes throughout the summer and fall.

Baking was another of her many skills, and she would craft family favourites every Sunday such as pumpkin pie and apple crumble. Similarly, her fruit jam was highly prized by anyone fortunate enough to receive a jar.

She loved her family and had many friends. All those who were fortunate to know Lori will miss her dearly.

A Celebration of Life will be held on Thursday, June 27, 2019 at 2:00 pm at Springfield Funeral Home, 2020 Springfield Road, Kelowna, BC. Condolences may be sent to the family by visiting www.springfieldfuneralhome.com.


The service for McALEESE, Lori is scheduled for Thursday, June 27, 2019 at 2:00 pm. Below you will find the map for the service location and the contact information should you have any questions.