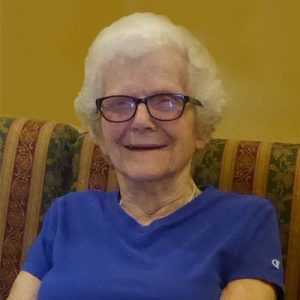 Patricia passed away peacefully at Kelowna General Hospital with her daughter Sandra Prettie at her side. She was predeceased by her husband, the love of her life, Roland Albert Hunt, her son Devlin Albert Hunt, her parents Georgina and George Bailey and all her siblings Allan Bailey, Alma Kelly , Hedley Bailey and Georgina Dayton. She leaves behind her daughters Sandra Prettie (Richard Bernard) and Cynthia Delaloye (Dan), grandchildren Meghan Desnoyers (Skyler), Brendan Prettie (Liz), Kristin Hunt-Prell, Ryan Hunt, Danielle Delaloye, and Nicole Delaloye and 4 great grandchildren Danny and Leah Hunt-Prell, Dade and Thane Desnoyers.

Patricia was born on St Patrick’s Day, hence her name which she said could be shortened to Pat or rarely Patty but never Patsy. Being raised on a farm near Marquette, Manitoba she told the story of when she first started school they would hitch the dog to a sled to get her to school where her siblings would ‘unload’ her and send the dog and sled home. Then on the return journey the dog and sled would meet them half way and pull her the rest of the way home.

She met her future husband, Roland Hunt, when he came to teach at the Marquette school. She was always very independent and told the story: “Roland told her he was going to ask her Dad if he could take her to the dance and Pat said, don’t you think you should ask me first if I want to go?” I guess they did go to the dance and the romance continued with Roland and Pat getting married June 15, 1946. They moved to Winnipeg, Manitoba and proceeded with their family, Devlin (1949), Sandra (1951) and Cynthia (1955).

In 1967 the family moved to a ¼ section farm in Brokenhead, Manitoba. One of Cynthia’s absolute favourite memories was when we were burning burdock on the farm, Dad and Cynthia were watching Mum poke at the fire to keep it going and Dad said: “Now there is a woman that likes playing with fire!” Cynthia says: “He said it with such love and admiration that it will always stick with me.”
Roland commuted to Winnipeg where he continued teaching until he passed away suddenly on May 10, 1968. Pat was devastated with the loss of her one true love, but with her amazing strength and determination she carried on raising their 3 children and saw them all safely move on to their own lives. Sandie is still enjoying the dance lessons. Mum taught her the 1-2-3 waltz, jig and ‘shuffle off to Buffalo’ among others. During this time Pat took a course and graduated as a Dental Assistant and worked for Dr. Turner in Beausejour, Manitoba until 1974.

In 1974 Pat moved to a nice home with a beautiful view of Lake Okanagan in Westbank, B.C. She worked happily as a Dental Assistant and then Receptionist for Dr. Johnson in Kelowna, B.C. In 1979 Pat joined with Sandie and her husband Bob Prettie to buy an orchard in Oyama, B.C. where she continued commuting to Kelowna until her retirement. They built a new house with a complete 2 bedroom suite for herself. She loved working in the beautiful garden she created and would often bring a ‘happy’ bouquet upstairs for Sandie to enjoy. Pat loved flower arranging and won ribbons for her beautiful, unique arrangements. She created a tiny bouquet in a little thimble and then an amazingly tall arrangement of gladiolas in a tall crystal vase. Just beautiful! Another of Pat’s enjoyments was cooking and she wasn’t afraid to try new recipes. At one time she delved into Chinese cooking and treated us to egg foo yong, battered shrimp, almond chicken, pork chop suey and of course fluffy white rice. We all enjoyed many great meals with our Mum.

Pat enjoyed a rich social life. She joined the Kalamalka Women’s Institute (KWI) and made many good friends while involving herself in their many projects from strawberry teas to the Robbie Burns celebration to gala fund raisers complete with fashion shows and hilarious skits. In about 2001, when Pat could no longer drive after the partial loss of her eyesight due to a minor stroke during her by-pass surgery she needed access to more of a social life. She decided to move into the Brookstone condominium in the nearby town of Winfield in 2014 or 2015. In 2017 she moved into assisted living in the Blue Heron Villa. She loved her life there with all the activities and wonderfully caring people, though she did chafe at the loss of some of her independence due to the onset of crippling arthritis in her hands and feet. With Cynthia’s help they purchased Mum’s red “Cadillac” walker. It was amazing to see Mum march across the street and up the steep hill to the grocery store, credit union and pharmacy and then back down the hill which was a bit scary.

Pat helped start the great tradition of Family Reunions. At the reunion in 2018 held in Gimli, Manitoba, she was essentially the matriarch or Grande Dame. All the relatives took time to sit with Mum, Grandma, Grammy, GG, and Aunty. All walking away richer for their time spent with the so tiny, strong, intelligent, compassionate, feisty Grande Dame.

We want to thank the residents and Staff of the Blue Heron Villa for the lovely Celebration of Life given May 8, 2019.

We encourage all to share your fond memories of Patricia Hunt. A wonderful woman who has touched so many hearts. She will be missed.

In lieu of flowers, memorial donations can be made to the Blue Heron Villa, c/o Lake Country Senior Housing Society, #100 – 9509 Main Street, Lake Country, BC V4V 2N3. We will always be grateful for the extra special care and peace of mind they provided.
Interment of her ashes to take place in the fall at Meadow Lea Church, Marquette, Manitoba.