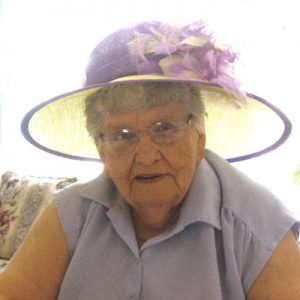 Elsie passed away peacefully with her great nephew Morris and his wife Karyn by her side on Tuesday, January 8th, 2019 at the age of 85 years.  Elsie was born in Petlura, MB in 1933 to Paul and Mary (Brentovitch) Stadnyk.  She was raised on the farm until 1947 when the family moved to Gilbert Plains, MB.

In 1949 Elsie married Archie Pawluk and they farmed north of Gilbert Plains.  They had two children, Mike born in 1950 and Liz born in 1952.  They moved into town in 1953 where Elsie worked at a coffee shop at the Gilbert Plains Hotel.  A better opportunity came in the early 1960’s and Elsie went to work the night shift at Plains Bakery; during the day she worked part time at the MacLeod’s Store as a retail clerk.  Mom was always a hard worker. While working two jobs she also helped Dad build a couple of homes.  In 1964, the family moved to Dauphin, MB where Elsie gained employment at the Dauphin General Hospital in the Laundry Department. Elsie and her family were destined to lead a nomadic lifestyle, and in 1968 they moved to Brandon, MB where Elsie worked at a Sewing Factory.  Her stay in Brandon was short lived, and 12 months later Elsie and her husband Archie moved to Thompson, MB where she was a “Domestic Engineer” (aka housewife.)  On her move back to Brandon, MB in 1972 she worked in housekeeping at the Red Oak Inn.  After a couple years, Elsie and Archie ventured to Ft. McMurray, AB.  During her 10 years in there, she worked as a retail store clerk at Hill’s Drugs where she formed a special bond with the owner Ken and his wife Diane Hill – a relationship she cherished right to the day of her passing.

There comes a time when one has to think about retirement, so Elsie and Archie moved to Kelowna, BC.

In Elsie’s early years she was very involved with the church, convening Bazaars, organizing church dinners and catering for various events.

She was always a crafter; enjoyed sewing, crocheting, knitting, cross stitching, petit point and painting Ukrainian “pysanky,” just to mention a few.  Her family is fortunate to have some of these possessions to cherish for many years to come.

Elsie was predeceased by her husband Archie, her parents Paul and Mary Stadnyk, brothers Bill, Mike and sister Teenie.  She is survived by son Mike (Jenny) Pawluk of Westlock. AB; daughter Liz (Al) Kozakowski of Thompson, MB; granddaughter Pamela Lyttle (David) of Onoway, AB; grandson Jared (Natasha) Pawluk of Stony Plain, AB; great-grandchildren Shjon and Abigale-Jadyn Lyttle of Onoway, AB, and Blake, Zachary and Owen Pawluk of Stony Plain, AB. Elsie is also survived by one sister, Sylvia of Winnipeg, MB.  Also surviving Elsie is her special great nephew and niece Morris and Karyn Showdra of Kelowna, BC and their family Brittany (Chris) of Cold Lake, AB, Jenna (Sam) of Winfield, BC and Charlie (“Chuck”) of Kimberley, BC, as well numerous nieces and nephews.

It gave the family great comfort knowing she was so well cared for at Mission Creek Landing. We sincerely thank them for their care and compassion.  It was a place where Mom was able to make many friends.

A Funeral Service will be held on Tuesday, January 15th, 2019 at 10:30 am at Springfield Funeral Home, 2020 Springfield Road, Kelowna, BC.  In lieu of flowers donations in Elsie’s memory can be made to Heart and Stroke Foundation, 4 – 1551 Sutherland Avenue, Kelowna, BC V1Y 9M9, www.heartandstroke.ca.

Send Condolences
Send Flowers or a Sympathy Card
In lieu of flowers, donations in Elsie's memory can be made to the Heart and Stroke Foundation, 4 - 1551 Sutherland Avenue, Kelowna, BC V1Y 9M9 Link: www.heartandstroke.ca


The service for PAWLUK, Elsie is scheduled for Tuesday, January 15, 2019 at 10:30 am. Below you will find the map for the service location and the contact information should you have any questions.