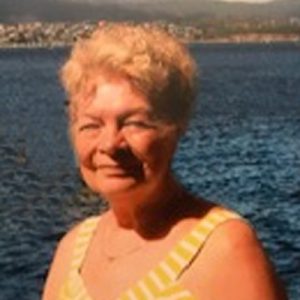 It is with deep and profound sadness that we announce Pat’s passing at Royal Columbian Hospital after a courageous fight with cancer on October 24th, 2019 at age 76.  She was a beautiful wife, mother, grandmother, sister and friend and will be dearly missed by all who loved her.

Pat was born in Southey, Saskatchewan and later moved to Regina and attended Sheldon Williams High School. She began her working career with Saskatchewan Power until she moved to Vancouver in the early 60s.  There, she worked for Canadian Pacific Railway.  She met and married Murray in Vancouver and Murray’s job directed them to move to Kelowna 45 years ago where they raised their 3 children.

Pat entered the childcare business and continued with that passion for many years, from which she enjoyed great satisfaction and success until retirement in 2009.  Pat’s love for her grandchildren continued through her entire life and she spoiled each one with pride and happiness.   She was able to travel to Australia every year where her daughter Shannon lives and watched her twin grandsons and granddaughter Kailani grow and she relished the times spent with them.

Pat’s infectious enthusiasm for life will truly be missed.  In both her personal and professional life, Pat brought a sense of understanding, generosity and poise that went beyond her role as a wife, mother, aunt, sister or friend.  She was always there to help out when called upon and more importantly, she volunteered for the TELUS Ambassadors and acted numerous times without being asked or acknowledged.  Pat’s life has touched many people over the years and her tragic passing has left a great void in our lives, but her memory will forever fill our hearts.

As requested by Pat, a private family gathering will take place at a future date.  In lieu of flowers, donations may be made to BC Cancer Foundation Kelowna, 399 Royal Avenue, Kelowna, B.C. V1X 5L3.  If you wish to send a condolence, post photos or share a memory, please scroll down the page to the area called “Condolences”.

Service
As requested by Pat, a private family gathering will take place at a future date.


The service for PICKENS, Patricia Ann (nee Rumpel) is scheduled for As requested by Pat, a private family gathering will take place at a future date. . Below you will find the map for the service location and the contact information should you have any questions.