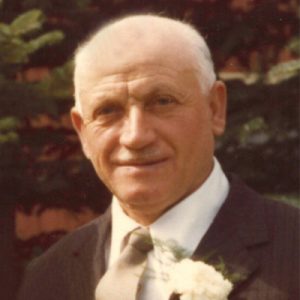 After a full and gratifying life, it is with great sadness that we accept the passing of a husband, father, nonno, and friend at the age of 99 (knocking on the door of his 100th birthday). Carmine passed away peacefully in his sleep at the Kelowna Hospice House on October 19, 2019.

Carmine was born to parents Luigi and Domenica in Terranova, Benevento, Italy on November 3, 1919. At the age of 31, in the quest for greater opportunity, he left his home for Canada, arriving in Montreal in 1950. After a year, his journey took him to Barret in northern BC, and then a few years later he ultimately settled in Smithers, BC, which he would call home for 33 years, while he was working for the CNR. It was also here, in 1954, he would marry his wife, Alba and they would then welcome their two sons Luigi (1956) and David (1959) into their lives. In 1981 Carmine retired and continued to reside in Smithers until 1987, when he left the frozen north for the warmth of Kelowna, and to join his brother Michele and his family. Kelowna was where he enjoyed the remaining 32 years of his life with family and friends.

Carmine’s passion was his incredible garden which gave him many hours of enjoyment. He continued with this labour of love as well as being out on his scooter until virtually his last days. A man who definitely closed out his remarkable life on his own terms.

He is lovingly remembered by his wife Alba, his son David, and his grandchildren Colby, Brandon, and Hayden, as well as many other family members and friends. He was sadly predeceased by his son Luigi and his daughter-in-law Lynda.

Prayers will be held on Friday, November 1, 2019 at 6:00 pm and a Funeral Mass on Saturday, November 2, 2019 at 11:00 am, both at St. Charles Garnier Catholic Church, 3645 Benvoulin Rd, Kelowna, BC. If you wish to send a condolence, post photos or share a memory, please scroll down the page to the area called “Condolences”.


The service for ROSSI, Carmine is scheduled for Saturday, November 2, 2019 at 11:00 am. Below you will find the map for the service location and the contact information should you have any questions.