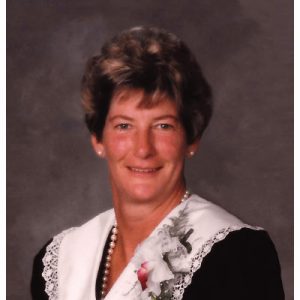 Sherrlyn Mary Sawatzky (nee Rohleder) passed away into the loving arms of her Saviour at her home in West Kelowna on December 4, 2018.

Sherrlyn is survived by her husband Richard. She will be dearly missed by her sister Fern (Darrell), her sons Brent (Tracey) and Mark (Gaylene), as well as her six grandchildren (Cassandra, Tyler, Calina, Damiane, Levi and Nathan).

Sherrlyn was born April 24, 1946 in Mannville, AB to Albert and Marjorie Rohleder. She was the second of two children. She was a high-energy child and an inquisitive teen who graduated in Grande Prairie, AB. Sherrlyn came to know Jesus as her personal Saviour through the guidance of Pastor Alton in Grande Prairie.

Shortly after their marriage in 1964, Sherrlyn and Richard settled on a farm in Vegreville, AB where they had their sons. Sherrlyn left her job at a bank to focus her energy on being a full-time mother and homemaker.

Sherrlyn and Richard moved to a number of locations in Alberta, always finding an Evangelical church for worship. When Richard retired from his job, they returned to his family’s farm (Carstairs, AB) and farmed for 7 years. Sherrlyn continued to maintain her role as an amazing and loving homemaker, mother and (later) grandmother.

Sherrlyn and Richard’s most recent big move had them spend the last 15 years in Kelowna, BC. This allowed Sherrlyn to be close to her sister Fern (Darrell), as well as her son, Brent’s family.

A Memorial Service for Sherrlyn Sawatzky will be held on Friday, December 14, 2018 at 1:00 pm at Springfield Funeral Home, 2020 Springfield Road, Kelowna, BC.


The service for SAWATZKY, Sherrlyn is scheduled for Friday, December 14, 2018 at 1:00 pm. Below you will find the map for the service location and the contact information should you have any questions.