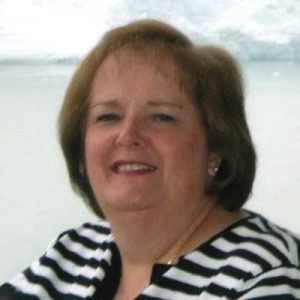 Maureen was born in Lethbridge, AB, on December 31, 1950 and went to be with the Lord on March 9, 2019 at the age of 68.  She is survived by her husband of 52 years Robert Stewart, her daughter Roxanne Stewart (Kevin Ewanchuk) of Calgary, AB and son Robert Neil (Terri) Stewart of Prince George, BC, grandchildren Sidney Ewanchuk, Jackson and Emmett Stewart, honorary grandchildren Safiya and Narin Kaloti and their parents Sam and Michelle, sister Gail McLean of Edmonton, AB and brothers Dennis Carrier of Lethbridge, AB, Robert Carrier of Okotoks, AB and Roger Carrier also of Lethbridge, AB, extended family Mary and Neil McIntyre of Inverness, Scotland. She was predeceased by her father Bernard Carrier, her brother Bernard Carrier, her mother Vera Carrier and nephew Stewart McIntyre of Scotland.

The family wishes to thank all the staff at Kelowna General Hospital, Sindi Ahluwalia Hawkins Cancer Center, Kelowna Hospice House and Dr. Rachel Carver for all the amazing care and attention they gave to Maureen on her almost 4 year journey.

A Memorial Service will be held on Saturday June 8, 2019 at 10:00 am at Springfield Funeral Home, 2020 Springfield Rd, Kelowna, BC with and interment at a later date in Lethbridge, AB. In lieu of flowers, memorial donations may be made to the Sindi Ahluwalia Hawkins Cancer Centre, www.bccancer.bc.ca. If you wish to send a condolence, post photos or share a memory, please scroll down the page to the area called “Share Your Condolences.”

Send Condolences
Send Flowers or a Sympathy Card
In lieu of flowers, memorial donations may be made to the Sindi Ahluwalia Hawkins Cancer Centre Link: www.bccancer.bc.ca


The service for STEWART, Maureen Ruth (nee Carrier) is scheduled for Saturday, June 8, 2019 at 10:00 am . Below you will find the map for the service location and the contact information should you have any questions.

Interment at a later date in Lethbridge, AB