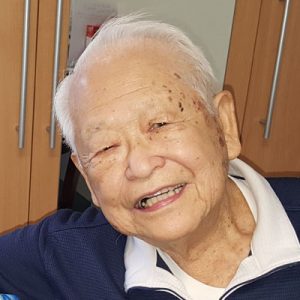 Shigeo (“Sid”) Tamaki, loving husband, father, grandfather and friend passed away peacefully at the age of 93 on September 12, 2018 at Mission Creek Landing Rest Home (formerly Sutherland Hills Rest Home). The family would like to thank the staff at both Mission Creek Landing and Kelowna General Hospital for their compassion and kindness.
Sid was born in Nanaimo, B.C. on March 10, 1925 to Komakichi Tamaki and Komae Okamoto and spent his early years helping his dad on the family fishing boat in Deep Bay.
As a result of the war, Sid and his parents relocated to the interior of B.C. where they resided in various communities before settling in Kelowna in 1946. Sid did a variety of jobs which included apple picking and working in the logging industry before finding employment on Gifford Thomson’s celery farm. This was Sid’s introduction to the business world as he along with his partner would transport culled celery provided by Gifford Thomson to Vancouver where they would sell it to restaurants in China Town. On their return trip to Kelowna, Sid and his partner would then go to Steveston, B.C. where they would purchase salmon from his partner’s friend and transport it back to Kelowna, where they found a ready market.
Sid and his partner also sold groceries door to door in Kelowna. After a year, Sid went into business on his own and in 1950 “Sid’s Grocery” was born. It was a few years later when Sid and his future wife Tomi made a trip to the US and saw a store painted in a unique fashion that the decision to paint red polka dots on the outside of their store was made. At that point, “Sid’s Grocery” became known as the “polka dot store” and remained a familiar local landmark and popular business for the next 38 years.
Sid met Tomi, a native of Summerland, in 1954 as she came to work for him as a cashier. She and Sid enjoyed working with each other so much that four months later on February 23, 1955 they were married. Sid and Tomi have enjoyed 63 years of marriage and have raised a family of four sons and a daughter.
In 1988, Sid and Tomi retired and spent time travelling to Asia, Europe, across Canada and the US. Sid also enjoyed spending a night out at various venues throughout Kelowna with his many friends.
Predeceased by his infant son Robert, his parents his sister Susan and his brother George, Sid is survived by his loving wife Tomi, his children Donald (Linda), George (Wendy), Lynn (Cameron), Gordon (Vicky) and Bruce (Mandy), his grandchildren Sean, Tracy, Noah, Claire, and nieces and nephews.
A gathering to celebrate Sid’s life will be held

Due to the regular hours of the golf course, parking will be limited.

Please RSVP your attendance by emailing yancha.lt@gmail.com on or before Monday, October 1, 2018.


The service for TAMAKI, Shigeo is scheduled for Saturday, October 6th, 2018, 1:00 pm - 4:00 pm. Below you will find the map for the service location and the contact information should you have any questions.

Due to the regular hours of the golf course, parking will be limited. Please RSVP your attendance by emailing yancha.lt@gmail.com on or before Monday, October 1, 2018.