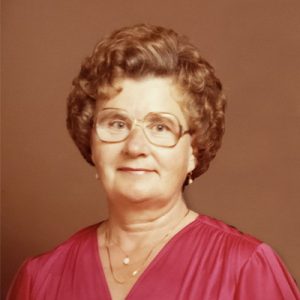 It is with heavy hearts that we announce the passing of Elsie Witzke.  Elsie passed away peacefully at Cottonwoods with her daughter at her side on October 28, 2019 at the age of 99.  She was born on October 19, 1920 in Michowice, Poland, the 12th of 18 children (5 of which died as infants).  She was predeceased by her husband of 72 years, Henry, by parents Michael and Anna Witzke and by siblings Otto, Edward, Lydia, Michael, Hedwig, Auguste, Ottylia, Heinrich, Albertina, Ida, Gustav, Theresa, Emma and Emilie.  She is survived by her son Karl-Heinz, daughter Anneliese (Otto) Leinemann, granddaughters Petra and Stephanie (Budd) Stanley, her sister Herta and brothers Bruno and Michael, and many nieces and nephews.

Elsie was the last of her siblings to remain in Germany (four of her siblings had immigrated to Canada in the late 1920s and the rest came to Canada from Germany, after being forced out of Poland near the end of WWII).  Elsie was lonely for her siblings and convinced her husband to move to Canada with their young family in 1952 and they settled in Rutland, BC.  She was a homemaker and loved to work in her vegetable and flower gardens and the family orchard with her husband (she much preferred the outdoors to being inside).  She also loved being Oma to Petra and Stephanie; she spent many summers in the wading pool with them, often cooked them kartoffel puffer (potato pancakes), fleisch (meat) perogies and pommelchen (donuts), and also taught them to play Rummoli and Canasta.  She enjoyed being a member of the German Canadian Harmonie Club (along with Henry), where she met many friends while playing cards, going for ‘Kaffee und Kuchen’, and attending dances.

In her mid-80s she began to suffer from severe arthritis, at which point Henry began to learn how to cook and clean.  At 93, it became too hard for 94-year-old Henry to give her the full care that she needed, so she moved in to Cadder Court at Cottonwoods.

The family would like to extend many thanks to the caring staff at Cottonwoods for their love and care of Mom/Oma for the last six years.  A funeral service is being held on Tuesday, November 5, 2019 at 10:30 am at Christ Lutheran Church, 2091 Gordon Drive, Kelowna, BC.  In lieu of flowers, those wishing to may donate to Christ Lutheran Church, christevangelicallutheran.com.


The service for WITZKE, Elsie is scheduled for Tuesday, November 5, 2019 at 10:30 am . Below you will find the map for the service location and the contact information should you have any questions.