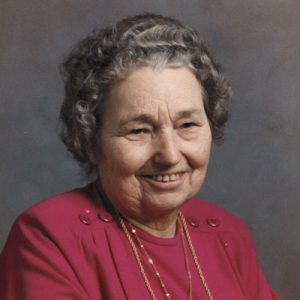 It is with great sadness that we announce the peaceful passing of Alma Bauer at the age of 98 on March 9, 2019.  After a brief illness at Kelowna General Hospital, she went to be with the Lord.

She was born in Marjanowka, Poland January 6, 1921 and immigrated to Canada in 1952 aboard the ship Beaverbrae.  Her luggage was stolen and she arrived with only the clothes on her back.

She would eventually settle in Winnipeg, Manitoba, marry Philip Bauer and move to Kelowna, BC in 1989.

Her strength and determination were admired by everyone who met her.  Alma was an expert seamstress and passionate about gardening, especially flowers. She loved animals of every kind and used to feed ducks in the winter down at a creek near her home. She was a devoted daughter, sister and aunt to her family and kind to everyone.

Heartfelt thanks to her many friends at Grace Baptist Church where she was a member and faithful servant of the Lord.  We would like to extend a special thank you to Alma’s dear friend Chris Smith for all she has done over the years.  Her kindness will never be forgotten.

Thanks to all the very kind staff at Kelowna General Hospital for their compassionate care.

Alma lived a long, blessed life and will be missed by us all.

“For God so loved the world that he gave his only begotten Son,

that whosoever believeth in him shall not perish, but have eternal life.”

Visitation for those who wish begins at 9:00 am March 14, 2019 with funeral service to follow at 10:00 am at Springfield Funeral Home, 2020 Springfield Road, Kelowna, BC. Interment at Kelowna Memorial Park Cemetery.


The service for BAUER, Alma (nee Ludwig) is scheduled for 10:00 am on March 14, 2019. Below you will find the map for the service location and the contact information should you have any questions.