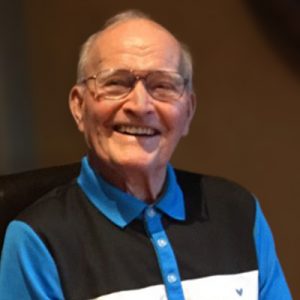 James went to the Lord on November 19, 2019 and to be with his wife, Marie, who predeceased him in 2015. James is survived by his children Grant (Bonnie) Janz of Lake Country, BC, and Glenda (Bryan) Jackson of Kelowna, BC; grandchildren Jeff (Jade) Janz, Dayton Janz (Kirsten), Jillian Jackson (Ingrid), Michael Jackson (Lori Ann), and Cory Jackson (Kristi); and great grandchildren, Will, Bailey, Jaden, Logan, Jessica, Samantha, and Nicole. He also leaves behind his sisters Lillian and Hazel and his brother, Ronald.

Born in Souris, Manitoba (one of 12) on June 24, 1926, James lived there until he was 21 and married his love, Marie. On their honeymoon they drove to BC and settled in the Okanagan. He helped build the roads in Kelowna and he worked on the farms and for Sun-ripe. In 1951, Jim and Marie bought an orchard in Oyama, BC where they farmed for 45 years. Upon retirement, they moved to Glen Meadows in Kelowna and James lived there until his passing.

Together Jim and Marie travelled the world, farmed and enjoy winters in Yuma for 36 years.

He will always be remembered for his hard work, positive attitude, infectious smile and unending faith. An amazing man; kind, generous, wise and caring. His love for his family, and friends was exceptional. He touched many in his lifetime and will be carried on in our hearts forever.

A Funeral Mass and celebration of James’s life will be held on Monday, November 25th at 10:30 am at St. Pius X, 1077 Fuller Avenue, Kelowna BC. It will be followed by a reception in the church hall and then interment will be held at Lakeview Memorial Gardens at 1:00 pm.

In lieu of flowers, memorial donations may be made to the BC Cancer Foundation, www.bccancer.bc.ca. If you wish to send a condolence, post photos or share a memory, please scroll down the page to the area called “Condolences”.


The service for JANZ, James is scheduled for Monday, November 25, 2019 at 10:30 am. Below you will find the map for the service location and the contact information should you have any questions.