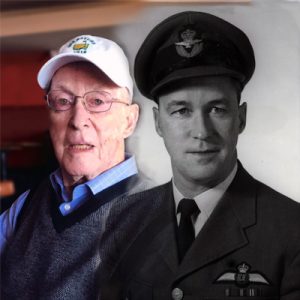 Another of the “Greatest Generation”, James Thomas Alan Kane “Al”, fell on October 28, 2019. Unlike many of those he was part of, he went on his own terms with family by his side.

Dad was a bit of an enigma, from our perspective he was quite analytical and cautious; yet, his legacy began as a teenager diving off a high bridge with his friends into the Red River in Winnipeg. Upon graduation from high school he enlisted in the RCAF as a pilot during WWII. Shortly after the war concluded, with no job, he married Eileen Kane (née White) and less than a year later the first of three children was born.

Dad got a job in data processing with Great West Life, a few years later he took on the role of managing the computer department for Chevron Standard in Calgary, AB.  Retiring in 1984, Mom and Dad moved to Peachland, BC, then Westbank, BC, and after Mom’s passing, he moved to Missionwood Retirement Centre in Kelowna, BC.

Of all the aspects of his personality, the one that impacted everyone he dealt with was his enthusiasm. His love of flying was sustained after the war, first as a flight instructor with the Winnipeg Flying Club and, after the move to Calgary, he joined the RCAF 403 Reserve squadron. He was a full participant in a wide variety of activities and some outside enterprises. Chevron has a very active employee organization that supported sports teams and social events, Dad and Mom were fully involved in all of them. This theme followed into retirement. They wintered in Yuma, Arizona, as part of that stay they hosted a Canada Day event each year that saw many of their American friends outside with signs asking to be allowed in; they were. Dad set up a golf league that is still going, something that really pleased him.

At one point he had aspirations as an entrepreneur, he and a friend were among the first to bring in Alfalfa Leaf Cutter bees to southern Alberta. Today those hives are everywhere, and even though it wasn’t the expected huge windfall for him, he was a pioneer in it.

Dad’s passing is a huge loss to those he leaves behind including sons Roger (Kerry) and Brian (Cheryl); daughter Daphne (Bill) Chalmers; many grandchildren and great grandchildren; and friend Edna Hatch. In his 95 years he set a standard as a husband, father, grandfather and friend that will last for a very long time.

The family is grateful for all the people who gave Dad their care, especially the staff at Missionwood and his doctor, Mike Purdon.

A celebration of his life will be held on Saturday, November 2, 2019 at 1:00 pm at Springfield Funeral Home, 2020 Springfield Road, Kelowna, BC. In lieu of flowers, a donation to the Canadian Cancer Society, www.cancer.ca, would be appreciated. If you wish to send a condolence, post photos or share a memory, please scroll down the page to the area called “Condolences”.


The service for KANE, James Thomas Alan “Al” is scheduled for Saturday, November 2, 2019 at 1:00 pm . Below you will find the map for the service location and the contact information should you have any questions.