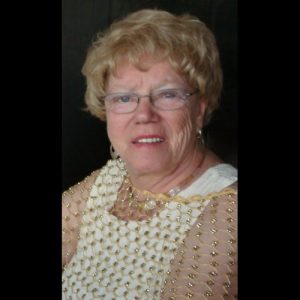 Born at Elk Point and raised in Marwayne, Alberta, Lee had many happy times growing up there. As a child she was a victim of polio; thanks to the perseverance of her dad she was able to walk again. This taught her to be determined, to always succeed no matter what she did. Throughout her life, she returned home many times to visit family and friends. When she spread her wings, she spent time in Lloydminster, AB and found the love of her life, Bob Acott.

Lee & Bob married and started a family of 4 children. Bob worked with the Bank of Commerce and was transferred to many places in Alberta & Saskatchewan, then he received an opportunity to move to BC. They relocated to Burns Lake where her father (Halvor), mother (Sally), and family were living. After 4 years of being there, a new opportunity lead them to Prince George, BC where they settled until retirement. In the early years in Prince George, she was a victim of polio again and recovered; this gave her more determination to have a great life.

Lee had a very ambitious career life. She worked as a dental assistant and a doctor’s assistant. In the evenings, she was a Sara Coventry Jewellery representative, and she would also make dried flower arrangements for a friend’s boutique. But her dream career was in Real Estate. Mom was a pioneer in the Real Estate field; she was one of the first female Realtors involved in that profession.

Lee helped Bob start the duplicate bridge club in Prince George. For many years, they were avid players and had many close friends from the club. They started travelling at that time because they participated in many Bridge tournaments.

Mom was involved in many organizations: She was the commissioner for Northern BC Girl Guides; she was a member of the Kinettes (Kinsmen) club, the Red Hats in Prince George and later in Mexico; Mom was a member of the Eastern Star (Masons) and Daughters of the Nile (Shriners); she started Sons of Norway lodges in Bella Coola, Burns Lake, and Williams Lake. She was granted a Life membership with the Sons of Norway for her commitment to the Organization and Rondane Lodge in Prince George.

Mom was politically involved in all areas: Municipal, Provincial and Federal. When Frank Oberle ran for the MP of Prince George, North Region she was his campaign Manager and helped to get him elected. A seat he held 2004-2015 with her continued support and friendship. From her experiences, she was accepted to a position in Ottawa being part of the “National Capitol Commission”.

Her home always welcomed so many friends & strangers: There were Shriner’s Bar-be-Ques, personal celebrations, Christmas Festivities; all made a full house. Always very special was our Norwegian Christmas with many friends to share the feast and our traditions of Lefse, Lutefisk, Kremkaka, the pickled herring, and Mom always made a big batch of Julekaga (Norwegian Christmas bread).

The snowbirds found a place in the Bahamas and lived there during the winter for about 5 years. They did much travelling throughout the USA then settled in Mexico for the rest of their retirement. When Bob passed, Lee stayed in Mexico for a few more years. She then moved to Kelowna, BC, and her son, Dale, moved there to join her. She later moved to The Okanagan Chateau Retirement and finally to David Lloyd Jones Retirement her final resting place.

We would like to give thanks to the people at the Chateau and at David Lloyd Jones who were instrumental in her care for the years she was with them.

In lieu of flowers the family would appreciate it if you would send flowers to someone to let them know that you love them or plant a tree.

Due to the current pandemic, no formal service will be held. Family and friends will be invited to join a Zoom gathering in the future, please check back to this site in the future for the link and date.