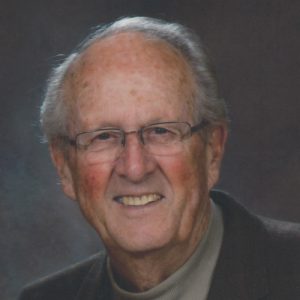 It is with deep sadness the family of James (Jim) Anderson announce his passing in Kelowna on Monday, October 6, 2020 at the age of 93.

Jim was born in Edmonton, graduated from Eastwood High School and attended UBC. He joined Imperial Oil Marketing in 1947 and worked in Edmonton, Grande Prairie, Red Deer and Calgary over the next 41 years. In 1996, Jim and Maureen made their final move to Kelowna.

A proud Shriner, Jim was a member of St. Georges Masonic Lodge #41, Kelowna Shrine Club #15, Gizeh Temple A.A.O.N.M.S. and Past Captain Al Azhar Arab Patrol, Past President of the Calgary Shrine Club, and Past Director of the Royal Order of Jesters CT. 42.

An ardent golfer, he was President of the Earl Grey Golf Club, a Director of the Alberta Golf Assn. and twice winner of the Calgary Senior Men’s Golf Assn. trophy, 1990 and 1994.

The family wish to thank staff and caregivers at Good Samaritan Mountainview Village Kelowna and Dr. Robert Williams for their care and support of Dad.

Due to Covid-19 restrictions, a celebration of Jim’s life will be held at a later date.

In lieu of flowers, donations may be made to Al Azhar Shrine Hospital Patient Transportation Fund (at 5225-101 Street NW, Calgary AB, T3L1S4) or a charity of your choice.