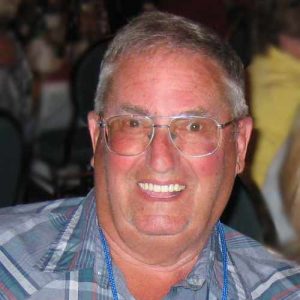 Born and raised in the Vancouver area, Harry moved to Kelowna in 1969 to raise his family and run his business – Kelowna Auto Towing.  With the support of his wife, Joan, and, being a hard worker in the 24 hours day, 7 day a week job, you would find Harry behind the wheel of his favourite tow truck anywhere, at any time of the day in the Kelowna area – perhaps under the shade of a tree on a hot summer day waiting for the next call, or, helping a stranded motorist over a snowy bank in a snowstorm in the middle of winter.

After selling his company in 1979 and spending a brief time working with the AMA Towing division in Calgary, Harry decided he preferred to be in Kelowna, so he purchased the company back in 1987 and continued to work hard in the towing industry until his retirement in 2000.

Harry was also an avid car enthusiast. He was one of the founding members of the local Okanagan Thunderbird Club and was fully involved in the association for many years. He spent his spare time working on, and showing, some award-winning Thunderbirds

Harry is predeceased by his older sister Gail, his loving wife Joan, and his oldest son Kim.

Left to share his memories are his son Randy (Kim); daughters Susan and Cheri; and his youngest son Robin (Ennien); along with 8 Grandchildren; numerous great-grandchildren; and many other family members and friends near and far.

The family would like to thank the staff at the David Lloyd Jones Home for their care of Harry during these difficult times.

By his request, no formal service will be held for Harry.