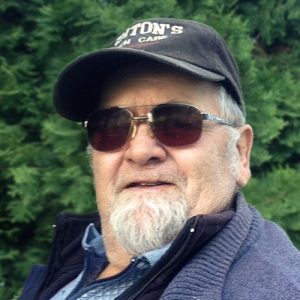 Garth Samuel Ashton passed away in Kelowna General Hospital on October 8, 2020 at the age of 73. He is survived by his wife Sharon; son Todd (Joann) of Kelowna; stepdaughters Lynne of Calgary, Laurie (Grant) of Kelowna and Donna (James) of Edmonton; daughter-in-law Diane (Rene); grandchildren Kendra, Mitchel, Joshua, Candice, Daryn, Andrew, Jacy and Ryann; great-grandchild Bentley; sisters Evelyn Gross (Lavern) of Tabor, and Dorothy Lee (Gerald) of Calgary; brothers Lynn Ashton of Slocan and Patrick Ashton (Peggy) of Slocan; and numerous nieces and nephews. Garth is predeceased by his brother Lyle and sister Marjorie.

Garth was born in Medicine Hat, Alberta, in 1947 and was raised on a farm near Burdet, Alberta. He owned and ran a lawncare and landscaping business in Kelowna for many years and was well known and liked by many people. He loved camping and fishing with friends and family and was a great fan of hockey, football and wrestling.

A celebration of life is to be announced at a future date. Should family and friends so desire, memorial donations may be made to the Heart and Stroke Foundation, www.heartandstroke.ca.