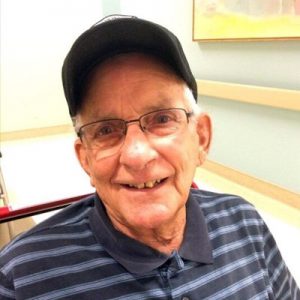 Vernon passed away on Tuesday, February 12, 2019 at the age of 83 in Kelowna, BC. He is survived by his loving children: Lloyd (Wendy) of Lake Country, Leslee (Corinne) of Kelowna, Sherry Delmar of Kelowna, and Jodi Michelle (Larson) Boss of Edmonton, AB. He also had four grandchildren: Amanda Auch, Ashley Delmar, and River and Judah Boss. And one great grandson: Nicholas Burke. He is also survived by his brother Alvin (Liv) Auch, and his sister Gloria Sukovieff (Tom); as well as numerous nieces and nephews, extended family, and dear friends. Vernon is predeceased by his wife Jackie and his three siblings; Lloyd, Irene and Loretta. As well as his son-in-law Barton Delmar and grandchild Jordan Delmar.

Vern was born on June 5th, 1935 in Barons, AB and lived on the farm with his parents and siblings until 1942 when he moved to New Westminster and then to Kelowna. After school he learned to drive truck and got a job with Chapman’s Freightline and drove for them for 17 years. He met and married Shirley Melwicks in Penticton where they lived for a while and then they moved to Kelowna. They had three children: Lloyd, Leslee and Sherry. They divorced in 1973.

He met Jackie Coderre shortly thereafter and they were married in Medicine Hat, AB in 1977. They moved to Edmonton for a short while where they adopted Jodi Michelle in 1980. They moved back to Medicine Hat and Vern worked the pipelines until he eventually started driving truck for Trimac Transport. This job led him to make a move back to BC where he and Jackie and Jodi settled in Kamloops for the next 20+ years. Vern retired from trucking with a bad back in 1995 and so he, Jackie, and their little dog Pepper enjoyed camping and fishing with family and friends throughout the Interior of BC after that. These were some of his most fondest memories. They even went camping into the States a few times, and once they even became “snowbirds” for a season. They sure would have liked to do more of all that but Jackie fell ill and died in the Fall of 2010 when Vern was 75 years old. He really started to slow down after her passing. So, when Jodi and her husband Larson made a move to Kelowna in 2014, they moved him back to the Okanagan as well. It was nice that in his last five years he was surrounded once again by all his beloved family. He enjoyed his grandchildren, homemade jam, oodles of cookies and crime shows like American Justice and Law and Order. He would also forever be offering for you to “sit down and watch Heartland” with him. ♡

He will be remembered as one of the most generous and kind people around. He was friendly and easy going with all those he met. He was not one to hold a grudge or criticize, and he was always ready to help however he could. He loved to joke and laugh, to tease and be teased. Vern didn’t take life too seriously and did his best to be open-minded and encouraging to those around him. There will be a big noticeable gap in our hearts and family without his presence here on Earth, but we are so very glad that he is now breathing easy, moving freely, and laughing loudly in Heaven with those who went before him. We love you Vern!