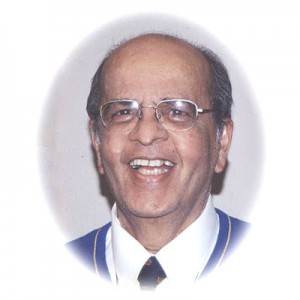 Rev. Albert Baldeo, “Tropic Al,” passed away at his home in Kelowna, BC on April 25th, 2011, lovingly surrounded by his wife of 48 years Beryl, their three daughters Ramona (Felis), Kim (Ron), and Kaylyn (Craig), and their eight grandchildren, (Keanna, Zachary, Kara, Elody, Rachel, Abby, Matthew, and Luke).  It brought to a close a remarkable life on earth, a life shared and beautifully co-created with his beloved spouse.  A life full of love and laughter.  A life given to God and others.

Born in Penal, Trinidad on April 21, 1930, Albert was one of 7 children born to Elodie and Arthur Baldeo. He was a teacher for ten years in Trinidad before studying Theology at Mount Allison University in Sackville, New Brunswick and St. Stephen’s Theological Seminary in Edmonton, Alberta.  It was at St. Stephen’s where he charmed a beautiful rural Alberta girl named Beryl Hobbs. They fell in love, married, and moved back to Trinidad, where he served as a Presbyterian Minister for 8 years.  While they were in the Caribbean, Albert and Beryl were very active in both church and community, setting the template for future places of service.  In 1971, the Baldeo family moved to Canada, where Albert served in the United Church of Canada for over thirty years.  They have lived in Kelowna since 1981, where Albert was minister of St. Paul’s United Church until his “retirement” in 1995.

Rev. Baldeo’s life and work, of course, could not be contained in a simple job description.  In his preaching, in his public prayers, in the thousands of weddings and funerals he officiated, he demonstrated his enormous gifts as an orator – part passionate prophet, part stand-up comedian.  He loved to entertain with humour, and lots of it.  He also loved to encourage others to look heavenward, to embrace life with an “attitude of gratitude.”  This was seen in his poems – over the years, he wrote thousands of positive and uplifting rhymes and gave them freely to family, friends, and strangers.   He wrote a weekly column of pastoral reflections in the Capital News.  He was Kelowna’s Chaplain, its Spiritual Concierge, and he was honoured to be part of “the hands and feet of God” in his own city.  To that end, Albert was devoted to Rotary International.  And he nurtured, advocated, and raised funds for countless organizations related to poverty and other social causes.  Aids Kelowna,  The United Way, and the Union Gospel Mission were just a few that benefitted.   In 1983, he was Kelowna’s Citizen of the year.  In 1992 and 2002, he received the Queen’s Commemorative Medal.  And in 2003, he was presented with the Governor General’s Caring Canadian Award.

It not a cliché to say he was loved by all who met him, for he took great interest in the

thoughts and feelings of anyone he met.  Survived by his wife Beryl, his three daughters and families, his sister Sybil (Rani) Sankar and his brothers Alfred and Gerry Baldeo, Rev. Albert Baldeo will be deeply missed.  Minister.  Husband.  Father.  Teacher.  Mentor.  Friend.  In lieu of flowers, memorial donations may be made to the “Rev. Albert Baldeo Memorial Fund”.

Condolences may be sent to the family by visiting www.springfieldfuneralhome.com, 250-860-7077.


The service for Baldeo, Albert Henry is scheduled for Saturday, April 30, 2011 at 10:30 am. Below you will find the map for the service location and the contact information should you have any questions.