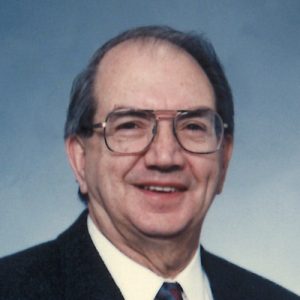 Desmond “Des” Ballantyne passed away peacefully on July 12, 2020, at the age of 95 years old. He is survived by his beloved daughter Lisanne Ballantyne and his sister Beryl Wall in England, as well as cherished nieces and nephews.  Des is predeceased by his loving wife Claire, father William, mother Annie, and sister Rhoda.

Des was born June 6, 1926, in Middleton, England and graduated from the Mechanical Engineering Program at the Union of Lancashire and Cheshire Institute. He often recalled his fascination at that time with planes and tinkering with motorbikes, including a motorcycle tour in Norway.

Always the curious explorer, Des moved to Canada in 1954, first arriving in New York City by ship, then travelling by train to Montreal to begin a new life working in aerospace with Rolls-Royce and Aviation Electric.  He also got his pilot’s license during this time. Through work, he met and later married Claire in 1964 and Lisanne was born the following year.

Des moved the family to Winnipeg in 1972, where he eventually worked as Factory Manager at Display Fixtures until his retirement. He enjoyed part-time work as well, including running his own janitorial company and playing music at weekend events for Garry Robertson Music Services where he quickly became one of the top requested deejays.  Des was also a member of the Freemasons since 1968 and one of the oldest members of Waverley Lodge #82 in Montreal.

Always active in his community, Des volunteered in Winnipeg with the Victoria General Hospital Lifeline Program for 5 years and more than 25 years with the Fraternal Order of Eagles, serving multiple times as President. Together with Claire, his time with the Eagles Club was a wonderful period of community, travel, and lifelong friends.

After losing Claire to cancer in 2007, Des moved to Kelowna for the sun, warmth and water. He enjoyed the simple pleasures of exploring the Okanagan, feeding the quail and sailing his small boat. He found deep gratification in taking classes and later volunteering with the Inner Peace Movement (IPM), providing him with community and a sense of his life’s purpose. IPM learnings helped him greatly as he struggled with dementia in recent years and he always enjoyed discussions about these deeper learnings over a nice glass of scotch.

Des has been described as a kind, gentle, curious, and intelligent man. He was equally proud of his British roots as he was of his ongoing attempts to learn French. He enjoyed a good party as much as his solitary library, and he could enjoy reading about quantum physics while watching a Monty Python show. He had no fear of death and was curious to the end about what might happen next.

A celebration of Des’ life will be held later this summer at Springfield Funeral Home in Kelowna, BC. Heartfelt thanks to the Reece Community staff at the Village of Smith Creek, where Des called home during his final months. Your care and compassion are deeply appreciated.

Should family and friends so desire, memorial donations may be made to the BC SPCA Kelowna Branch, spca.bc.ca, in honour of Des’ lifelong love for animals.