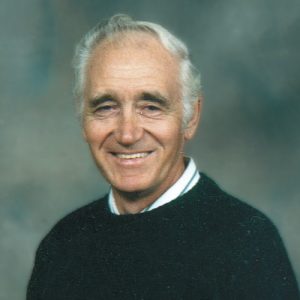 He was born on the family farm in Eyebrow, Saskatchewan where he lived with his parents, 10 siblings, sometimes his Uncle Jake, and Grandmother as well. These were difficult times for the family, however, they were remembered by Pete as good times, and they did not go hungry as they grew their own food. The local school only went to grade 9 so that is where his education ended.

In 1947, the family moved to Kelowna, Pete immediately found work at the local sawmill, S.M. Simpson. He started in what was known as the Box Factory where they made Apple boxes. He also worked as a Talley Man, Lumber Grader, and then trained to be a Saw Sharpener. He remained a loyal employee for 45 years.

He was a faithful follower of Jesus, and his church was always very important to him. He loved to use his tenor voice, singing in male quartets and choirs for most of his life. He found great joy in music.

Pete enjoyed all sports, both in participating and watching. At the age of 82 he bowled a perfect game!

Pete and Genny did a lot of travelling visiting places like Zambia, South Africa, Ecuador, Australia, China (cruise the Yangtze River), and many others. But most of all he loved camping in the beautiful country in which we live, camping with family (especially the grandchildren) and many very dear friends.

Being with family was always very important to him, and he enjoyed the numerous reunions he was able to attend with his extended family.

He is survived by his wife of 64 Years, Genny; one daughter Diane (Wayne) Bremner and their children Sara and Jonathan; his two sons Ron (Kathy) and their children Jacqueline, Julia, and Lucas; Wes (Sanni) and their children Aila and Luka; brothers Henry, Frank, Abe, and Dick; two sisters Catherine (Frank) Pankratz and Anne Forde; and many nieces and nephews. He was predeceased by his parents Jacob and Maria; two brothers Jake and John; and two sisters Mary (Vic) Friesen and Margaret (Jack) Sinton.

A Celebration of Life with be held on Saturday, August 6, 2022, at 2:00 pm, at Willow Park Church, 439 Highway 33, Kelowna, BC. At the time of the service, it will be livestreamed by Willow Park Church, for those who are unable to attend in person (see below).

The family expresses thanks for all the flowers and cards they have received since Pete’s passing.


The service for UPDATED SERVICE INFO, BARTEL, Peter J. is scheduled for Saturday, August 6, 2022, at 2:00 pm. Below you will find the map for the service location and the contact information should you have any questions.