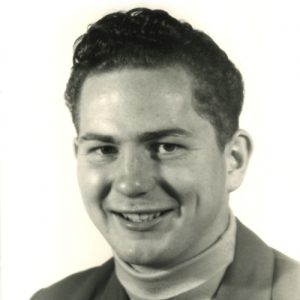 UPDATED SERVICE INFO: A Memorial will be held on Saturday, October 3, 2020, at 2:00 pm at PROVIDENCE BAPTIST CHURCH, 2210 Stillingfleet Road, Kelowna, BC (just off Guisichan Road). Due to the current pandemic restrictions, please contact the family or church to register.

While Art attended Queen Elizabeth elementary school in Calgary, AB, his Grade 1 his teacher asked him in front of the entire class whether he was German or Jewish. When he said he was of German background, and because it was during WWII and therefore it was not kosher to be either, this opened the door for him to experience some form of bullying. This experience impacted Art deeply; learning from this adversity, he was determined to treat other with kindness. High school was at Crescent Heights, Calgary where he was involved with sports, especially football. He spent his spare time working with his father at Model Dairies; hence his love for ice cream! Art Attended Army Camp in Vernon, BC. In 1957, he Married Frances Naydiuk. And, then he graduated from Prairie Bible College in 1962 and Briercrest Bible College in 1976, earning his Bachelor of Religious Studies degree. He was ordained under the Evangelical Free Church of Canada in 1967 and pastored churches in Alberta, British Columbia, and Saskatchewan; he pastored for twenty-one years. Besides preaching, he taught Sunday school, youth ministry, boys clubs, Bible studies, camp directing, etc. He was always ready to give a hand to his parishioners with farming, haying, harvesting, branding, etc. Wherever there was need he was there giving his best. Art loved visiting his parishioners and getting to know them, and he gained many friends that kept in touch with him until his passing.

Art learned to play the saxophone, and he had to work hard to learn and play every note! Art dropped out of pastoring for a while and was employed with Loomis and Brinks. He still made himself available for preaching, mentoring, and teaching. Whatever he did he gave his all. He loved his motorcycle and spent much time visiting new areas. He was an avid hunter, providing for his family in this way. Living in Hinton, AB, he drove bus taking miners to their mine site, and he also bussed hockey teams to their games. Although he retired in 2011, he was never idle, filling in with preaching, teaching, and mentoring. He was a Sunday school teacher to Korean teens for seven years and loved it.

Slowly, but surely, dementia crept in, it took away his driving, hunting, and everything that he enjoyed. It was a heartbreaking time for him. After about two and a half years, his body and mind gave up, and Art passed into the arms of the Lord on July 18, 2020, with his family at his side.

A special thank-you to Brandt’s Creek Mews for their care of Art.