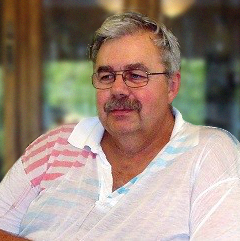 It is with great sadness that we announce the peaceful passing of Jerry at the young age of 66.

Jerry is survived by his wife Mary, daughter Karen, much loved granddaughter Anessa-Mai, son Eric all of Kelowna. He leaves behind his brothers Larry (Donna), Regina, his children Angie and Aimee, Wayne (Anna Marie) Daniel and Joshua, Kelowna, Bill (Patti) Lee his daughter Kamdyn, Regina, Drew of Saskatoon, Uncle Al (Ethel) Diel of Surrey. He is also survived by numerous in-laws and their families who will also miss him so very much.

Predeceased by his parents Valentine and Mary (Diehl) numerous Aunts, Uncles and Cousins. Jerry was born and raised in Regina. In 1970 his cousin Debbie Spooner (Ford) set him up to meet her high school best friend Mary. They were married on October 7, 1972. In 1972 they moved to Calgary for work, in 1975 they moved back to Regina where their children were born Karen in 1977 and Eric in 1980. In 1980 BC was calling so they move to Surrey, BC. Wanting a small city to raise their family they made the move to Kelowna in 1983 where most of Mary’s family resided. Joining them in Kelowna was Jerry’s mother and in 1984 Jerry’s grandmother moved to Kelowna to live with them.

Jerry and his Mom operated a video store (National Video) for several years. He was also employed at SRI homes for a few years. Jerry worked most of his life in the construction industry as a “drywall taper”. Then in 2008, he got what he called his “dream job” driving a bus for the city of Kelowna, which he did until health issues forced him to retire. In 2010 he was selected as one of the many bus drivers from across Canada to drive Athletes and Visitors for the winter Olympics which he was most proud to do.

Jerry had the best sense of humor and loved telling jokes. He was a very good cook. His specialty dish was “Lemon Chicken” which some lucky people got to enjoy when we had our “Chinese Night” dinner parties.

His fur babies Buffy and Miko are waiting for him so the spoiling can start again.

The family would like to thank Karen and Chrissy at Glenmore Lodge for their care of Jerry and Dr. Wierstra and the ICU nurses for your kindness and compassion at this most difficult time.

Interment will be held at Lakeview Memorial Gardens on Friday, July 31, 2020. Due to Covid-19 restrictions, only family members will be in attendance.