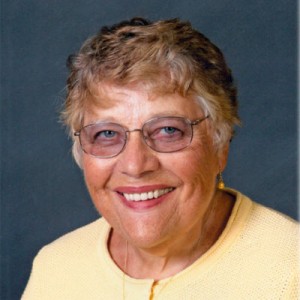 Passed away peacefully and went to be with her Lord on March 16, 2012 at Hospice House surrounded by family. June was born January 13, 1938 in Trail, BC. She will be remembered with great love by her devoted husband, Gerry; daughter Patricia (Norm) King in Squamish, BC and her son David in Kelowna; grandchildren Christopher, Kyle and Nicky and great-grandchildren Hannah and Kara, mother Rita Ross, sister Lorraine Fitzgerald (Peter) Trail, BC; and numerous nephews, nieces and cousins.

June was predeceased by her father, John Jeros and step-father Lewis (Reg) Ross.

She served in the RCAF as a nurse and worked as a medical office assistant for many years.

In 1991 she and her husband moved to Kelowna. She became a dedicated volunteer at the Kelowna cancer centre shortly after it opened in 1998. The joys of her life were her family, gardening, baking, crafts and travelling (especially to Arizona).

She was first diagnosed with cancer in 1985. The re-emergence of her cancer in 2003 began a long courageous battle with the disease. June’s strong faith and extensive support system helped to maintain her joyful spirit throughout this journey.

The family thanks all the doctors, nurses, staff and volunteers at the Cancer Centre, and recently Hospice House. A very special thank you to Dr. Gillian Fyles, Dr. Marianne Taylor and Dr. Islam Mohamed for their loving care and support throughout this journey.

A memorial service will be held on Tuesday, March 27, 2012 at 1:00 pm at Trinity Baptist Church, 1905 Springfield Road, Kelowna with Pastor Jack McLaughlin officiating. Memorial donations may be made to: BC Cancer Foundation in Support of the Kelowna Centre, 399 Royal Ave, Kelowna, BC V1Y 5L3.


The service for Bayman, Rita June is scheduled for Tuesday, March 27, 2012 at 1:00 pm . Below you will find the map for the service location and the contact information should you have any questions.