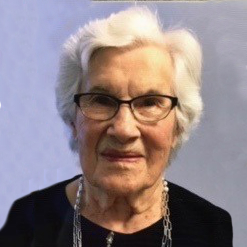 Lena Bazuik (née Chypyha) was born in Playmore, Saskatchewan on December 7, 1923. She was the oldest girl in a family of 11 children. Mom knew how to work and play and she did both with passion, dedication and enjoyment. Mom worked at the local high school in South Porcupine, Ontario, and was loved by the staff and students. She worked tirelessly raising money for a new church in Kelowna, BC by organizing and cooking traditional Ukrainian food for bake sales. Mom was a team player and made everyone look better on her team.

She was passionate about family first. Her cooking and baking became legendary over the years, and family dinners were feasts! In the summer, Mom could be found near the top of the cherry trees where the choicest cherries were found. When fishing, Mom would catch the most and the biggest. A forty pound chinook leads the parade. Mom loved to play cards and she was proficient and competitive to say the least.

At Mount St. Mary Hospital, Mom was able to follow her strong faith in God. She attended the Chapel at every opportunity. She joined the choir, the band, the Christmas play, exercise groups and the Friday art class. At age 94, Mom became an artist and created show stopping paintings. Mom became the poster girl for elder care and was featured in a number of publications.
She will be missed!

Our everlasting thanks goes to the administration, medical staff, and care workers at Mount St. Mary Hospital.

In lieu of flowers, donations can be made in Lena’s memory to Mount St. Mary Hospital, Victoria, BC.

A graveside service will be held on Friday, August 28, 2020, at 2:00 pm at Kelowna Memorial Park Cemetery.  A Celebration of Life will be held in Kelowna BC at a future date.

The family would like to invite all who want to pay their respects to join by livestream on Friday, August 28, 2020, at 2:00 pm PDT. (see below)


The service for BAZUIK, Lena is scheduled for Friday, August 28, 2020, at 2:00 pm. Below you will find the map for the service location and the contact information should you have any questions.