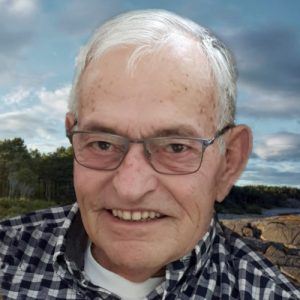 Roger Henri Beasse, 81, of Lake Country, BC, passed away peacefully at home with Shirley, his loving wife for 61 years by his side, on August 21, 2021.

Roger developed a spinal inflammation which caused paralysis of his lower body, and he was in the Kelowna General Hospital for 74 days.  His spirits were high, always joking and telling nurses and home care how to rig the slings and use the lift to move him from his bed to his power chair. He was very happy the necessary equipment had been installed so that he could be at home, but after only 9 days at home his heart gave up.

Roger was born in Ste. Rose du Lac, MB to Henri and Augusta Beasse, the oldest of six children. He learned to weld at the age of 15, moved to Winnipeg in 1959 where he met Shirley that fall.

Roger was always a very hard worker, as a Welder, an Ironworker (Local 720 Edmonton), and owner of Robdale Contractors, a General Contracting company specializing in structural steel and bridge erection all over AB, SK, and BC.  Roger obtained his Private Pilot’s license in 1967, often flying from Edmonton to Manitoba to keep in-touch with our families or taking our long-term employees on our annual fishing trip to a fly-in Lodge at Christina Lake in NE Alberta. The last plane Roger had was a twin-engine Cessna 310 which he loved to fly, but he’d say, “no more hay fields, it’s too hot on landing”.  Roger loved to travel, enjoying many cruises and vacations in sunny destinations with family and friends.

Roger retired to Vancouver Island in 2004, but never quit working.  No matter what he did, it was with great integrity and perfection.  He refused to accept “it’s good enough”.

Roger is survived by and will be greatly missed by his wife, Shirley; sons Dale (Karen) of ON and Robin (Christine) of BC; grandchildren Elizbeth, Devin, Matthew, Amber (John), and great-grandchild Gabriel of ON; and grandchildren Shyloh (Jake), Chantal and Dante, and great-grandchild Sage of BC; as well as by his brother Fernand and sister Gilberte of MB; and many extended family members.  Roger was predeceased by his sisters, Denise and Lauraine, and his brother, Laurent.

You are gone My Love, but you will never be forgotten and one day we will be together again.

In lieu of flowers, donations may be made to the Salvation Army or a charity of your choice.

No service at this time, a Celebration of Life will take place at a future date in Ste. Rose du Lac, MB where Roger’s ashes will be laid to rest.

Any messages of love, support or condolence can be sent to inmemoryofrogerbeasse@gmail.com.