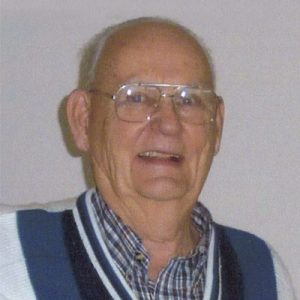 Ernie lived in North Glenmore from 1959 to the present. If you ever asked where he went to school, he would answer proudly, with that often-seen twinkle in his eye, Benvoulin U, then chuckle at his joke. His first job after graduating from high school was at Imperial Optical where he worked for 17 years becoming a licenced optician. He joined the Kelowna Fire Department as a volunteer in 1952, then the paid staff in 1967 until he retired in 1992 with the rank of captain. Ernie and Kaye bought their ‘little 2-acre farm’ on Longhill Road in 1959 and lived there until they built a home on their orchard on Snowsell Street in 1977. He loved the peaceful surroundings of his orchard & the physical work it entailed as it allowed him to unwind from life. It also gave him an excuse to have all the ‘necessary’ equipment that went along with farming including four tractors, even if he didn’t really need all four. In 2014 they sold the farm & moved into an adult community. Ernie had many talents including fixing anything that was broken, working on his vintage cars, collecting numerous treasures, and sharing his opinion. He often told his children he raised them to think for themselves then pretend to be annoyed when we actually did. He was very proud of his family and greeted his children by name despite his advancing Alzheimer’s. Through the years, Ernie and Kaye enjoyed many hobbies including working together on their farm, boating, curling, snowmobiling and traveling, often in their RV.  Our family would like to thank Brandt’s Creek Mews and Dr. R. Joshua for their compassionate care of our Dad.

Dad’s favourite piece of advice in the past few years has been “keep your chin up and pointing forward.”

In lieu of flowers please donate to the Alzheimer’s Society, www.alzheimer.ca or the charity of your choice.

Send Condolences
Send Flowers or a Sympathy Card
In lieu of flowers please donate to the Alzheimer's Society or the charity of your choice. Link: www.alzheimer.ca


The service for BENZER, Ernie is scheduled for Saturday, March 16, 2019 at 1:00 pm. Below you will find the map for the service location and the contact information should you have any questions.