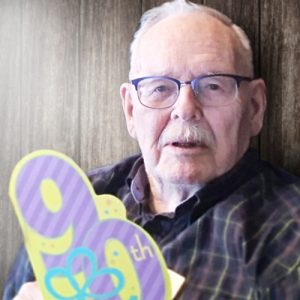 It is with heavy hearts, we announce the passing in peace of our dad/grandpa/great-grandpa/brother/uncle; and beloved husband and provider for our mother Irene. Dad was a servant of God and is now in Heaven.

Bill was born in Calgary, Alberta ninety years ago. He spent his childhood and youth in Calgary until he, with his young bride, departed to Ontario to complete his formal education and degrees at McMaster University. At the young age of four, he became a Christian and thereafter spent the greater part of his eventful life serving the Lord. He has served as a church pastor in several rural churches near Hamilton, Ontario and in Edmonton, Alberta.  As a missionary, he served both in East and West Africa with prior language training in Portugal, Spain. During his career in missions, our dad had learned to speak 7 different languages.

In July 1963, Bill completed his missionary work in Africa and returned to Canada with his wife and young family. At that time, cruising was more economical than flying, so we sailed back to Canada on a seven-week journey aboard the Pacific & Orient, S.S. Oronsay. This ship docked in many ports around the world, including India, Malaysia, Indonesia, Australia, China, Japan, and Hawaii. Once back in Canada, Bill was a pastor for years at Laurier Heights Baptist Church in Edmonton, until he began a new Government career as assistant manager of career counselling in St. Paul, Alberta which led him to Vancouver and eventually to Kelowna in 1975.

During dad’s retirement years, he transposed colour/black and white slides and then created a storybook album for each of his children in the format of a photobiography.  In these thoughtfully written biographies, he shared events and stories of our childhood adventures. We will be forever grateful for these memories. He also wrote a couple of family history books featuring our older ancestors. A love of ancestry led him to become a member of the Kelowna & District Genealogical Society. For many years, people would contact Bill from the UK, USA and other countries, and it brought him great delight to be able to help others locally and internationally to connect with their own family roots.

Bill’s recreational interests included fishing and camping and if there was a gravel road heading to a lake…we found it!  Bill’s hobbies included beautiful photography of flowers and nature, reading, model trains and scenery, stained-glass, ceramics, gardening, and stamp collecting.

Bill was a member of The First Baptist Church in Kelowna since 1975. After 45 years, his stained-glass light fixtures still hang in the sanctuary ceiling. At First Baptist, he would lead and speak on various Biblical topics and weekly Bible studies. His amazing and witty sense of humour will be remembered by all who knew him!

The family would like to thank his oncologists, Kelowna Hospice Society and his family physician, Dr. Pavan for all their concern and care. Also, thanks are given to numerous relatives and church friends for their visits and video chats. Our dad is forever with his Lord and Savior. We will always miss him.

In lieu of flowers, donations may be made to Canadian Baptist Ministries

If you are unable to attend in person, please click here to join the family online by Livestream.