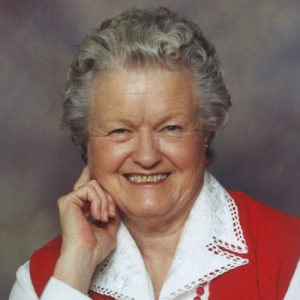 Norma Bowman, passed away peacefully Thursday, January 19, 2023, at Sun Pointe Village in Kelowna, BC at the age of 88 years. She was born to Norman & Helena Bowman April 12, 1934, on the farm in Standard, Alberta. She was from a farming family, her most memorable times were growing up in the farming community of Michel Natal, BC (Sparwood). Her family later moved off the farm to Bowness, Alberta where she attended Bowness High School, joined the choir, and met her husband to be, Irvin Lockwood. She never lost her love for the farm and made many trips on the bus from Calgary, AB to Cochrane, AB to her Aunt & Uncle’s to help with chores, ride horses and spend time with their family.

She had written in her high school year book she wanted to go into nursing, this didn’t happen then as she married young and raised her three children. She always aspired to be in the medical field and at age 53 completed a Care Aid course in Kelowna. She attended many people throughout the West Kelowna area, helping with meals, household tasks, and bathing clients, all with great care and compassion up until she retired at age 65.

Her family moved to Edmonton, AB in 1967, where she worked at Macleods Bonnie Doon for many years managing the shoe department. Her laughter and voice could always be heard throughout the store, and everyone was always greeted with her smiles.

She moved to Kelowna in the late 70s with her second husband. Tearing down a couple of older homes in Kelowna, they then used various door knobs, antique glass, bricks, wood and other materials to build a beautiful new home on Moberly Road in Winfield, BC.

She later moved on her own to Green Bay in Westbank, BC where she bought a mobile home and there she met Allen who made her laugh, took her fishing, camping, and later joining Good Sam’s. They travelled many places throughout BC and Alberta. She later purchased a home on Elliot Road where she and Allan gardened, had fruit trees, and made homemade apple juice and tomato juice that was loved by all. Her love of embroidering was proudly displayed on her walls, she sewed all her curtains and knitted many hand towels, dish cloths & slippers. After Allan passed away, she was introduced to Nick through a friend of the family. She loved her home on Elliot Road, and she continued to enjoy gardening and travelling in the motor home. When Nick passed away in 2014, she sadly was diagnosed with dementia and had to sell her beloved home.

Her new journey took her to Sun Pointe Village where she loved taking part in Happy Hour, dancing at the Legion, outings on the lake, and sing songs. She could always be seen people watching and smiling with a twinkle in her eyes. She could pick up and play any instrument by ear, the sound of her playing her piano organ often times could be heard down the halls of Sun Pointe.

She loved having family at her home where the game always appeared, and her signature meal was Pot Roast and Yorkshire Pudding. Her home was always open to family and friends, where there was always laughter. Grandchildren fondly remember quick giggles; summers in the boat, fishing on the lake; carrots and other vegetables from the garden served with lots of ranch dressing; and hot-tubbing  (and then running through the snow) in the winter.

She will be fondly remembered and dearly missed. ❤️

The family wishes to thank all the staff at Sun Pointe Village for the wonderful care, compassion, and attention provided to our Mom through her journey the last seven years, it was appreciated very much… Especially the hugs.