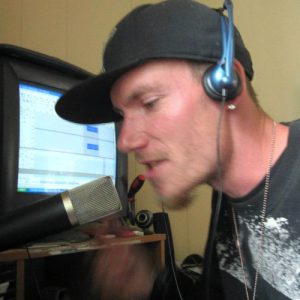 Dan was born in Jasper, AB on November 7, 1979, and resided with his parents in Valemount, BC. In August 1983, he was blessed with the birth of his sister Christine. He nicknamed her “strawberry” and loved to “boop” her nose. Christine left suddenly in October 1983 of Sudden Infant Death Syndrome. Dan’s family moved to Kelowna, where Dan went to preschool. The family moved back to Valemount where he attended school to grade three. On Dan’s 6th birthday in 1985 he received a brother; he now shared his birthday with his Uncle Edward and his brother Edward. The Bradfords moved to Campbell River on Vancouver Island in May 1987, until after he graduated from high school in 1998. During his time in Campbell River, Dan made many lifelong friends including Josh Collins. With the births of his sisters, Amanda in 1989 and Jessica in 1995, his family was five strong.  Dan had recurrent health problems that sometimes left him unable to perform physically strenuous activities. During these times he developed a love for video games. He was active with wolf cubs, scouts, baseball, hiking and camping; when he was well he was almost fearless. The family moved to Calgary, AB with Dan’s friends, Josh and Tyler, in tow. Dan worked at the Calgary Stampede Rodeo grounds, Animal Feed Plant, and Standens Spring Mfg. with his dad and uncle.

He met his future wife Shauna in Calgary. 2000 brought the birth of his daughter Aliceah.  Soon after, the entire clan moved to Didsbury, AB where Dan worked at Unifeed in nearby Olds. When the rest of the clan moved to the Okanagan, Dan, Shauna, and  Aliceah remained in Didsbury until moving back to Calgary in 2002. Dan and Shauna were married in a small family ceremony at Bear Creek in West Kelowna. Lilly Christine Bradford arrived in Calgary on October 9, 2003. With a family of four and another baby on the way they moved to Kelowna to rejoin the family here. Raithe Bradford was born on his sisters birthday October 9, 2004. Dan and Shauna both worked at a call centre in Penticton, then Dan was employed at Tolko Sawmill in Kelowna. When the family fell on hard times, the children stayed with their grandparents. Dan and Shauna stayed in West Kelowna until they split in 2006. Dan moved to Vernon and worked as a cook. He worked at several restaurants in Vernon, Kelowna, and Peachland. Dan also worked with his dad at Greenwood Forest Products in Penticton.

Dan had always liked rap music and started producing some of his own with his sister and brother-in-law. Dan met Donovan Shipmaker “Jackal” and Raynor Hougan “Acidic Rain” and the Khilla Brothers were formed. As a member of the Khilla Brothers, Wicked Space Army, and Mind Revolution, he performed at various venues in British Columbia and Alberta including opening for the rap group Swollen Members. He was also known as “Chef 4D”, “Chef”, or simply “4D”.

Dan became a grandfather in 2018 with the birth of Ellora. During the last year Dan worked at the new “Wings” restaurant in West Kelowna. He loved working there, not least of all because, he got to work alongside his son Raithe.  He was expressly proud of and happy with his “mansion” he built with his dad, mom, son, and daughter.

The family would like to invite all who want to pay their respects to join the service by Livestream on Wednesday, September 30, 2020 at 1:00 pm. If you wish to send a condolence, post photos or share a memory please scroll down the page to the area called “Condolences”.

THIS SERVICE WILL BE LIVESTREAMED/BROADCAST ON WEDNESDAY, SEPTEMBER 30, 2020 AT 1:00 PM