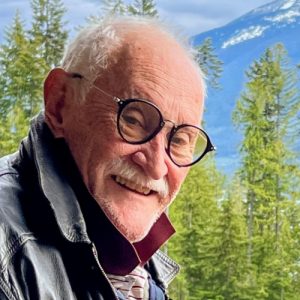 Dudley was born in Kent, England, to Thomas and Dora May (née Fitz). When he was only 9 months old, they made the journey to Rhodesia (Zimbabwe), where his two younger brothers, Scott and Charlie, were born.  Growing up, Dudley spent many days playing with his cousins George and Eleanor and always spoke with deep affection for their mother, “Auntie Boo”. He attended the University of Rhodesia for a B.Sc. Econ. and then went to London where he certified as a Chartered Accountant.

Dudley met Pauline in London; they married and, in 1975, moved to Vancouver, BC, Canada. They had two children, Chelsey and Lawson, and lived in the Coquitlam, BC, area for many years. In 1988, Pauline sadly died of ovarian cancer; the children were still quite young. Dudley managed to pursue his career as a bankruptcy trustee, running his own practice, and caring for his two kids. He was involved with the business community, as an active member of the local Rotary club, and had many great relationships with friends and neighbours over the years.

Once his kids were grown and launched, Dudley moved to West Kelowna, BC. The top choice over other locations he considered for his retirement years. He thoroughly enjoyed the warm weather, the beautiful house he redesigned and, of course, the stunning view overlooking the lake. He took pride in his garden, delighted in hosting people for meals, and going out to eat, though as many friends would know, he would fight you if you ever tried to pay the bill. He often talked about the coffee group, driving down to the lake in the morning, and watching the deer, magpies, and other creatures that enjoyed his yard and were drawn to his gentleness.

Dudley loved to travel. He visited every continent except Antarctica and always had many stories to share about his adventures in China, India, Hongkong, Mexico, Europe, and South America. He also visited his kids on their adventures in Japan and Australia. In most recent years, Merida in Mexico’s Yucatan became an annual hot spot. When he returned, his excitement and joie de vivre was palpable and contagious.

Dudley loved his three grandchildren, Keaton (age 6), Meara (age 4), and Quinn (age 3), and was always keen to hear updates and anecdotes. He liked to read and share his favourite novels with friends and family. He would get up all hours of the night just to watch Formula One and Indy car racing, cheering along the drivers and yelling at the crashes and mishaps. Dudley will be remembered as passionate, intelligent and creative, someone who was curious about places and people, and determined to go his own way. His legacy is one of generosity and kindness, as he was always ready to share what he had with another person in need. For those close to him, Dudley’s intensity was matched by his gentleness and heart. He had a wit and silliness that could emerge at unexpected (and often inappropriate) moments. We loved him for all of this, and he will live in our gatherings (especially with food), in our gardens, in our adventures, in our laughter, and always in our hearts.

Surviving family members of Dudley include, his children Chelsey and Lawson; grandchildren Keaton, Meara, and Quinn; his siblings Scott and Charlie; and his cousins George and Eleanor. He was predeceased by his wife, Pauline, who died in 1988.

A small Celebration of Life will be held summer of 2022 in both West Kelowna and Vancouver. In lieu of flowers, we invite you to share a memory on this page and pass on an act of generosity to someone in need.