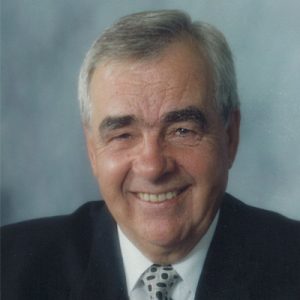 On Saturday, May 11, 2019, in Kelowna, BC, Robert (Bob) Germain Bundon, loving husband and father of six children passed away at the age of 86. Robert was born on March 13, 1933 in Kerrobert, SK to Michael and Mary Bundon. He earned his Chartered Accountant Designation in 1957 and worked for many rewarding years, retiring as Managing Partner from Deloitte and Touche in 1997. On July 9, 1955 he married his beloved wife, Beverly. Together they raised five daughters: Donalda Hansen (Wayne), Dolores Bundon (Dean Dubé), Valerie Bobyn (Michael), Eileen Sadlowski (Mark) and Colleen Wright (Bill).  They lost their youngest daughter Rosemary at the age 4 in 1972.

Bob always had a cheerful disposition and was a friend to everyone. He loved his career and served the communities of Prince Albert and Saskatoon well through membership on multiple Committees and Boards. He spent many joyful hours with his friends golfing and curling. He also loved farming which he felt blessed to return to as a hobby farmer at BET Farms in Prince Albert.

Most of all he loved his wife Beverly with whom he shared 64 years of marriage, his daughters who were the only ones who never let him be the boss, his sons-in-law who became his sons and his many grandchildren and great grandchildren who loved their “Gump”. He was happiest surrounded by his large and loving family. He faced each day with gratitude and graciousness even in the face of the heavy burden he had to bear with Progressive Supranuclear Palsy, a rare neurological disease, in his last few years. He has earned his peace.

The family wishes to thank Dr. Alexis Thomson and all the staff at Village at Mill Creek for their compassionate care during his final years in Kelowna, BC.

A Celebration of Life will be held at 10:00 am on Sunday, May 19, 2019 at Springfield Funeral Home, 2020 Springfield, Kelowna, BC. In lieu of flowers, memorial donations in memory of Bob may be made to Parkinson Canada, www.parkinson.ca. If you wish to send a condolence, post photos or share a memory, please scroll down the page to the area called “Condolences.”

An additional service be held in Prince Albert in August. Confirmation of the arrangements will be made at a later date.

Send Condolences
Send Flowers or a Sympathy Card
In lieu of flowers, memorial donations in memory of Bob may be made to Parkinson Canada Link: www.parkinson.ca


The service for BUNDON, Robert G. (Bob) is scheduled for Sunday, May 19, 2019 at 10:00 am. Below you will find the map for the service location and the contact information should you have any questions.

An additional service be held in Prince Albert in August. Confirmation of the arrangements will be made at a later date.