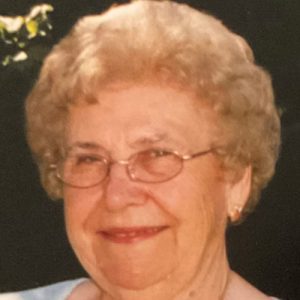 On Saturday, January 7, 2023, Valentina Calissi (née Bachmann) died peacefully at Mission Creek Landing Retirement Home in Kelowna, BC at the age of 92.

Valentina (Vallie) is survived by her loving children, Piera, David (Sheila) and James (Lisa); grandchildren Angela, Daniel, Alexander, Ethan, and Isabella; and great-grandchildren Ryan and Claire; as well as her brother-in-law, Pietro Calissi and many caring nieces and nephews. She is sadly predeceased by her beloved husband Alfredo.

Valentina was born in Balmaz, Romania, on November 19, 1930, and moved to Kelowna in 1948. She is well known in the East Kelowna community where she and her husband owned an apple and cherry orchard. Valentina also worked as a nurse’s aide at Kelowna General Hospital and enjoyed providing care to patients on the medical, surgical, and rehabilitation units. After she retired, she volunteered at the Kelowna Hospice House where she provided support to families and their loved ones.

Valentina had many interests and passions. She is famous for her excellent cakes, desserts and breads which she served and shared with her family and friends. She was proficient at cross-stitch needlepoint, a skill she learned as a child in Romania. In retirement, she penned a book about her experiences as a refugee in war-torn Europe and new Canadian in Kelowna. Valentina along with Alfredo, traveled extensively and frequently visited friends and family members in Italy and Germany forming life-long friendships.

Valentina was loved by her family and friends and known for her excellent sense of humour and outgoing, hospitable, and optimistic character. She loved to help people and could always be relied upon for support. She will be missed.

The family would like to thank the nurses and doctors at the Mission Creek Landing Retirement Home for the excellent care they provided Valentina over the last few years.


The service for CALISSI, Valentina is scheduled for Saturday, January 28, 2023, at 10:00 AM. Below you will find the map for the service location and the contact information should you have any questions.