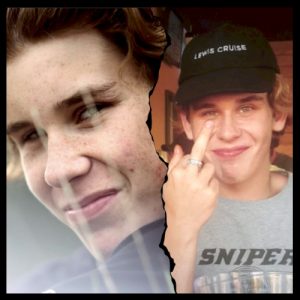 It is with our world completely shattered, and our lives utterly devastated, that we announce the tragic passing of our boy, My Scoob, Kaine Marcel Carlson Kirke. Kaine was born September 21, 1997 and left us tragically on July 25, 2022.

Kaine was fun, hilarious, witty, loyal, loving, empathetic, and passionate… to say the least. He had the biggest heart and cherished his family and friends. He always made it clear that he would do anything for the people he loved. Kaine was also very socially aware and cared deeply for those in the community who were less fortunate. In earlier years, Kaine and his Nan delivered meals with the Salvation Army to the unhoused in Kelowna. Kaine was also an avid participant in Go Skate Day, an event to promote skateboarding in the community for all ages and all circumstances. In later years, Kaine continued to bring awareness to the unhoused folks in Kelowna through his videography.

With regard to his active lifestyle, Kaine was a strong, athletic young man. He was an extremely talented skateboarder and snowboarder and loved adventure. He always pushed himself to new heights with his chosen sport, never afraid of the consequence or injury. Among other bruises, bumps, strains and sprains, some of these lead to concussions, torn ACLs, lost teeth and slipped spinal disks… but of course if he couldn’t skate, he could still film. In his earlier years, Kaine was a talented player of both hockey and lacrosse. He had even been chosen to play on a lacrosse rep team. Winters and springs of his pre-teen years were always spent travelling to tournaments and games throughout the province.

On top of his keen eye, Kaine had an ear for music. In his late teens and early twenties, he quickly became a blooming music and video producer. This endeavour included making music videos and beats for musicians across Canada and the US. For this work, Kaine travelled to many places in both countries to work with the artists. Kaine was also very creative and had an amazing artistic eye. With these skills and his entrepreneurial spirit, Kaine created several well known brands including Slayworld and Soja, among other smaller projects. Kaine designed, printed, and sold clothing through these branded designs, which often also resulted in tattoo designs that his closest friends and family wear with pride.

Above all, Kaine was his own person. He loved his mom more than anything in the world. He never felt the need to “fit in”. He was not defined by societal norms and paved his own way. As indicated through his large social media following and product sales, Kaine and all his creations were incredibly influential, well-loved, and respected.

On July 25, 2022, Kaine became a victim of the “other pandemic”. His family would like to speak the truth about his tragic passing. In honour of Kaine’s life, we ask that truth be spread in regard to this epidemic and awareness be raised. Our children are dying. Having the same issues that many of us had as young adults should not be a death sentence. One choice and he will never have the opportunity to choose again. SOMETHING HAS TO CHANGE. It may be the difference between life and death… For those with a voice and in a position to do so, please, help us help our youth. Speak out, speak up, write your MLA in support of resources for every member of a community.

We are grateful for your love and support through this difficult time. To honour Kaine, we ask that you hug those in your life and tell them you love them. We ask that you respect all those you interact with and offer them encouragement, support and empathy, rather than choosing to judge their actions.

A Celebration of Life will be held on SATURDAY, SEPTEMBER 3, 2022, at 4:00 PM, at SPRINGFIELD FUNERAL HOME, 2020 Springfield Road, Kelowna, BC. Following the celebration, a reception will follow at The Farm.


The service for CARLSON (KIRKE), Kaine Marcel is scheduled for SATURDAY, SEPTEMBER 3, 2022, at 4:00 PM. Below you will find the map for the service location and the contact information should you have any questions.