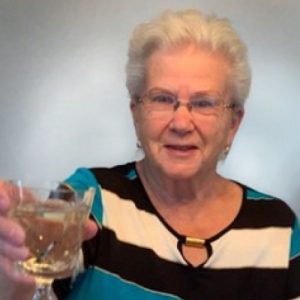 With great sadness we share the unexpected passing of Judy on April 21, 2021, at the age of 78 years. Predeceased in 2016 by her beloved husband Alf, she is survived by her son Tim Caron of Lake Country; daughters Janine (George) Potter of Red Deer and Jackie (Dean) Lardeur of Calgary; granddaughters collectively known as ‘short-stuff’: Nicole, Madeline, Jessica, Alexandra and Kaitlyn; sisters Beth, Lynn and Pat; and many extended family members.

Born in Calgary in 1942, Judy grew up on her parent’s farm north-west of Red Deer where she attended rural schools, participated in the 4H Dairy Club, and enjoyed the many animals, especially her little Shetland pony named Tony. Judy felt like every day on the family farm was a day spent looking for adventure, an attitude she would take into later life on her many travels.

Judy and Alf met in Red Deer and were married in July 1962. These early years saw them starting a family, and then moving permanently to Kelowna in 1968 where they raised their family. New to the community, Judy and Alf quickly became friends with neighbours Linda and Darwin Kramer who would become cherished lifelong friends.

Judy worked in the Sears jewelry department for a number of years, then briefly at the main switchboard at KGH before training as a Ward Clerk at the hospital. She spent five years juggling two jobs when she became co-owner of Sew Elegant Fabrics with her partners Linda and Bernie, following her passion for sewing. When Sew Elegant closed its doors in 1993, Judy returned to Ward Clerking where she remained until her retirement.

Judy spent many years as an active member of the Kinettes/K40 Service Clubs, and later, the Vintage Car Club of Canada, where she and Alf met many wonderful friends. After retirement from KGH, Judy just couldn’t stay away, and so she volunteered her time at the KGH Perking Lot coffee shop where she could keep up with the people she had loved working with. More recently Judy volunteered at the Rutland Hospital Auxiliary Thrift Store, and was involved with Days for Girls.

Judy enjoyed a variety of interests over the years, even better if it was social: playing on a slowpitch team, creating many family ‘masterpieces’ through ceramics, being part of a book club, and meeting with her backyardigans to drink wine and visit. The one activity that remained constant throughout was her love of sewing which had her creating everything from potholders to cherished flannel jammies to beautiful wedding dresses.

At age 50, when she claimed everyone thought she should be in a rocking chair, Judy proved to them she was ‘off her rocker’, when she went skydiving at the airport in Salmon Arm for the first time, only to repeat the activity weeks later with her daughter and son-in-law.

Judy loved nothing better than having a trip booked and sharing her experiences once she returned. She and Alf were extremely fortunate to have had the opportunity to travel to many countries around the world, made all the more fun and memorable when those travels included some of their closest friends. Most recently, Judy loved to winter at Rincón de Guayabitos in Mexico with friends from Kelowna and enjoyed taking scenic European river cruises with her granddaughters.

In Judy’s words: “I consider myself to be a lucky woman. I was raised in the best of times, married a good man, have a family that makes me proud, and a great bunch of friends who, along with my family, have helped me through my journey.”

Due to current Covid-19 restrictions, a Celebration of Life will be held at a later date when Judy’s friends and family will all be able to gather and celebrate her.

In lieu of flowers, donations to the charity of your choice would be appreciated. Cremation arrangements in care of Springfield Funeral Home.