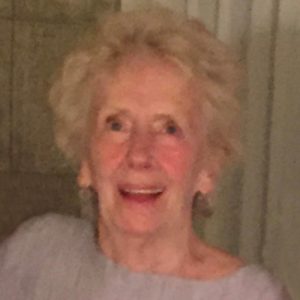 Val passed away peacefully and comfortably at home with family after a brief illness with cancer.  Val is survived by her husband George Strocher; son Scott Carruthers; daughter Leslie and son-in-law Neil Lauer; and brother Bonnar Dowler.

Val was born April 18, 1936 in Dauphin Manitoba where she grew up with her loving parents George and Jean Dowler, brothers George, Bart and Bonnar and sisters Beverly and Sandra.

Val met Don Carruthers in high school, and they later married and had four children: Karen, Scott, Todd and Leslie.

The family moved from Manitoba to Kelowna in 1973 where Val lived, worked and played for the rest of her life. She enjoyed being a stay at home mom until the late seventies when the kids were teens, and she took a medical office assistant course and started working again outside the home. Val enjoyed a lengthy career at Valley Medical Labs where she made some dear, lifetime friends.

When Val retired, she said that she didn’t want to be a retiree who sat at home and knit all day; she planned to say “yes” to any invitation she got and try any activities she had the opportunity to. To her friends’ and family’s surprise, one of those first activities was dragon boat racing where she met her partner George. Val loved the sport, practised, competed and won some competitions with George and their team. Val loved to travel both in western Canada and also internationally and had many exciting international adventures with family and friends. Val enjoyed dancing with a clogging group, acrylic painting, and doing volunteer work with Westside Health Network.

Val was a kind and loving daughter, sister, wife, mom, aunt, and friend; she will be dearly missed by all who were blessed to know her.

Val’s family would like to thank Dr. Paul Hart and the Palliative Care nurses and Care Aides who provided amazing care for Val. In lieu of flowers, the family would prefer memorial donations be made to Kelowna General Hospital, www.kghfoundation.com, or the BC Cancer Foundation, donate.bccancerfoundation.com.

Due to the current pandemic, no formal service will be held. Family and friends will honour her each in their own way.