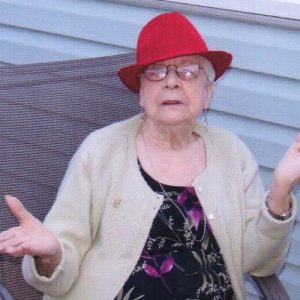 Born in Tonbridge, Kent, England to Albert and Elsie Pettitt. Vera died one day after her 99th birthday in Cottonwoods Extended Care on August 19, 2021.

As a young girl, Vera was active in dance and later an accomplished ballroom dancer. She often spoke of dancing every night during the war. She met her husband, Harold Earl Cave, at a dance. They were married in Tonbridge on September 20, 1945. Vera later joined Harold in Edmonton, AB, Canada in 1946 travelling with a shipload of war brides. They lived in several Alberta towns, and Fort St. John and Quesnel in British Columbia, following the oilfield and trucking operations.

Vera was an avid volunteer for the Girl Guides, managing their thrift shop, and advanced to the position of Commissioner. She also volunteered for the Canadian Arthritis Society and was a member of the Trans Atlantic Brides. Her leisure time was spent bowling, which she loved. She loved light opera, the songs and music of the big band era, and played the piano.

Vera and Harold spent many weekends travelling in their motorhome to go to their favourite fishing hole. They also travelled to Reno on several occasions.

In 1988, Vera and Harold moved to Kelowna, BC settling down in the Mission area. After Harold passed away, Vera still took trips to Reno, an Alaskan Cruise, and she enjoyed her local casino.

Vera was preceded in death by her loving husband Harold; her parents Albert and Elsie; her brothers Albert and Alan; and her two sisters Lillian and Barbara. She will be remembered by her daughters Lorraine (Angele), Shirley (Decker), and Sandra; her grandchildren Jennifer (Wayne), David (Lerma), and Kirsten (Alasdair); and her great-grandchildren Alisa (Cole) and Gabriella. Vera will also be remembered fondly by her nephews Jim, Doug, and Larry and her niece Maureen; also her nieces Mary, Linda, and Trisha and nephews David and John in England.

The family would like to thank, and express their appreciation to, Dr. Emily Botting, and the staff of Cottonwoods Extended Care for their care and respect and a special warm thank-you to Vera’s favourite Don Cobbett.

Due to the Covid-19 restrictions, the family will gather at a later date to celebrate her and honour her passing.