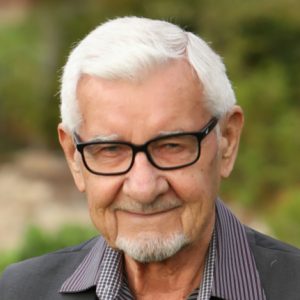 Born in Smoky Lake, Alberta, Bill moved at a young age with his family to the Ukrainian rural farming community of Yellow Creek – Spirit River. There he grew up, met his love Anne at a dance, married, and began family life. During these years, Bill was a grain farmer and a truck driver until he found his passion/talent for building. In 1967 Bill and Anne and their four daughters moved to Kelowna, BC where he would continue to hone his skills as a builder. He built many houses both in Alberta and BC during his working years, including seven for his own family. Over time, finishing carpentry became his expertise and his work was always highly respected for its excellence. Once Bill retired, he enjoyed grandchildren, great-grandchildren, golfing (often with the grandchildren), travelling (Mexico being his favorite), square dancing, socializing with his many friends, and especially spending quality time with his large family. Amidst many health concerns and much physical suffering in his last years, Bill’s quiet strength sustained him as he continued to be the honored patriarch of his 37-member loving family. He will be deeply missed but his legacy of living an example of moral character and love will remain with us forever. The family wishes to sincerely express their heartfelt thanks to Dr. Erasmas and the medical team on 3East at KGH for their exceptional care and compassion.

A Mass of Christian Burial will be held on Friday, July 31, 2020, at 10:00 am at St. Charles Garnier Parish, 3645 Benvoulin Rd, Kelowna, BC, with Father Wayne Pfliger officiating, with interment to follow in Kelowna Memorial Park Cemetery. Due to the current pandemic restrictions, it will be by invitation only. Should family and friends so desire, memorial donations may be made to the Heart and Stroke Foundation, www.heartandstroke.ca.


The service for CHAHLEY, William “Bill” is scheduled for (Invitation Only) Friday, July 31, 2020, at 10:00 am. Below you will find the map for the service location and the contact information should you have any questions.