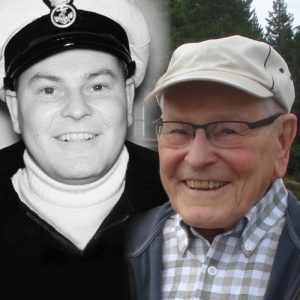 Paul Frank Chappie, born June 2, 1932, died peacefully at home on January 4, 2023. He is survived by his wife, Mary T. Fabris, many nieces and nephews and their families, and the extended Brown family of Calgary. He was predeceased by his parents Frank and Mary Chappie, his 2 sisters and 5 half brothers, and his adopted family, the Websters.

Paul was born in Vernon, BC and at age 9 moved to Winnipeg where he received his education and spent his working life. After high school, he served as a Petty Officer in the RCN (Reserve) during the Korean War and later as a weekend sailor. His mechanical aptitude earned him an apprenticeship with the Manitoba Telephone System where he spent nearly forty years in the Engineering and Human Resources Departments. After retirement, he enjoyed volunteer work with the Telephone Pioneers and pursued his passion for woodcarving. In 1997, he fulfilled his dream of returning to the Okanagan where he enjoyed the quiet life and spent many happy hours in his workshop.

Paul faced his life’s many challenges with optimism, quiet heroism, and a devastating sense of humour which brightened every encounter. With his ready smile and natural charisma, he made friends easily. He cherished the friendships he made throughout his working life and in his new life in Kelowna. He was delighted when so many joined him to celebrate his 90th birthday. We are blessed to have had Paul in our lives and to have had this opportunity to show him our love.

Please remember Paul in your own special way — a smile, a hearty laugh, a fond memory, a simple prayer, a kind gesture to someone else, or a donation in his memory to your favourite charity.

Many thanks to the team at Guisachan Family Medicine who have cared for Paul with such compassion over the past 25 years, and the PCDMT who have made the past 18 months much easier. Special appreciation to his adopted sister Arlene Brown and niece Judi Mohammed who have been with him throughout.