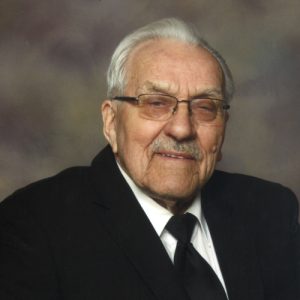 We are saddened to announce the passing of Paul Chopek Sr. on January 13, 2023 at the age of 96. Paul was predeceased by his wife, Mona, his sister, Mary, and his son, Paul Jr. He leaves behind his children Rosslyn (Dennis) Anaka and Michael (Diane) Chopek; his brothers Ron and Dave Chopek; his grandchildren Wayne Antonishin, Melanie Anaka, Mark Anaka, Jason (Kelli) Chopek, Jamie (Jennifer) Chopek, Jeremy (Ashley) Chopek and Sara Chopek; his great-grandchildren Reese, Kaelin, Nathaniel, Daphne, Brynja, Kade, Lilja, and Grace.  He also leaves behind his beloved daughter-in-law, Colleen, wife of Paul Jr.

Paul was born and raised in Meleb, Manitoba, where he met his loving wife of 49 years, Mona Josephson. They were married in Gimli, Manitoba on December 1, 1946, where they resided until moving to Red Lake, Ontario in 1951. Paul and Mona went on to raise their three children in Red Lake and Balmertown, ON and retired to Lake Country, British Columbia in 1989. While Paul and Mona absolutely loved their retirement time in Lake Country, the pair settled in Kelowna, BC.

Paul earned a respected reputation in the Red Lake District – a lasting legacy of a community builder and leader. Both he and Mona were involved in every aspect of the Red Lake community; parents who helped coach and drive kids to baseball and hockey, builders who constructed the outdoor skating rink and first nine holes of the golf course, and volunteers who were present every time something needed to get done. The couple’s dedication to their community was apparent in their lengthy involvement with the Kinsmen and Kinette Clubs, with both Paul and Mona attending every meeting for over 20 years.

Paul began his career with the Balmertown Volunteer Fire Department, eventually becoming Chief of the Balmertown, Cochenour, and McKenzie Island Brigades. Paul was instrumental in the creation of the Volunteer Ambulance Brigade for the District. He finished his long, successful career working as a Surface Superintendent at Dickinson Mines, retiring in 1989. Remaining dedicated to his community, Paul joined the Rutland Lions Club and Kelowna Central Club, where he served for many years. Paul became involved in the Knights of Columbus at St. Pius X Catholic Church, where he earned his Third and Fourth Degrees – an honour that brought him great pride.

Paul’s dedication to helping his family and his friends never waned. Paul was a loving father, a dedicated husband and a true pillar of every community in which he lived.

Paul’s family would like to thank Brandt’s Creek Mews Care home for taking such wonderful care of him over the last few years.

A Funeral Mass for Paul will be held Thursday, January 19, 2023 at 11:00 AM, at St. Pius X Catholic Church, 1077 Fuller Ave, Kelowna, BC, followed by a small reception, provided by the Catholic Women’s League.


The service for CHOPEK, Paul is scheduled for Thursday, January 19, 2023 at 11:00 AM. Below you will find the map for the service location and the contact information should you have any questions.