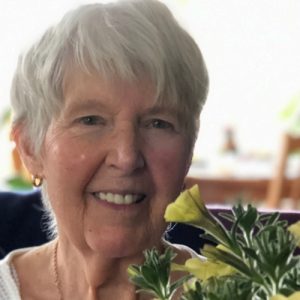 It is with heavy hearts and profound sadness that we announce the passing of our dear mother, grandmother, and friend, Margaret May Churchill, on October 25, 2021, surrounded by loving family and friends during her final days and weeks.

She is survived by her daughters, Bev Churchill (Paul Gallo) of West Kelowna and Marny Churchill (Mike McNeil) of Princeton; grandchildren, Jamie Gallo (Karen Bonina) of San Jose, California and Samantha Gallo (Tate Goodman) of Vancouver, Richard Churchill of Chilliwack and Tanner McCabe of Moncton. She is predeceased by her father, Richard James Soby (1891 -1969), and her mother, Mabel (May) Elizabeth Soby (née Gillard) (1899 – 1977).

She was born in Bristol, England on October 17, 1930. Bristol was a shipbuilding city and during the Second World War was not a safe place to live. Margaret lost a dear aunt who was returning home from work on a bus that was destroyed by a bomb. Her parents had earlier decided that a move to the country was necessary.

At the age of 10, Margaret wrote the 11+ Exam to determine her options for any future career and was able to pursue her chosen path as a teacher. She was “a candidate presented by the Fairfield Grammar School Bristol” (the school also attended by Actor, Cary Grant) to the Universities of Bristol, Reading and Southampton, having “passed the First School Certificate Examination of Bristol University held in July 1946” (age 15) in English Language and Literature, Geography, Modern History, French, General Science, Mathematics and Domestic Subjects. Through the University of Bristol, she was admitted to the Higher School Certificate Examination in July 1948 in English, French, and Mediaeval and Modern History.

From 1949 to 1951, she attended the City of Worcester Training College at the University of Birmingham Institute of Education and obtained a Certificate in Education gaining credits in Principles of Education and in the Combined Course for Teachers in Primary Schools. In a testimonial by the principal of the City of Worcester Training College, she was described as “a most capable student who hides her undoubted abilities behind a mask of reserve.” In 1951, she qualified to teach at the primary and secondary levels through the Ministry of Education (Teachers Branch) in London, United Kingdom.

She immigrated to Canada aboard the Empress of Britain from Liverpool, arriving in Quebec via the St Lawrence River on June 27, 1956. Thereafter, she resided in Toronto, Ontario. While in Ontario, she worked in a bank until re-establishing her teaching qualifications. After obtaining her Permanent Elementary School Teacher’s Certificate through the Ontario Department of Education in August of 1960, she taught in Ontario until her relocation to British Columbia (BC) in November of 1966.

As an only child and her parents in England, she did not have family in B.C. She was, however, soon to meet, Bud and Elaine Richardson. They were lifelong friends and as close and supportive of each other as any close sibling family group. Vast geographic distances did not pose an issue for their friendship or the connection of their two families who have been in each other’s lives for over 54 years. Bud and Elaine, you each continued in her heart until her final breath. Thank you for all you did for our family over the years!

She focused her attention in the early years in B.C. on her two young children. In 1970, she took the steps necessary to re-establish her teaching qualifications. She attended Simon Fraser University (SFU) in 1974 and achieved a “Standard Certificate” to teach in the public schools of BC through the Department of Education in 1975. As an avid learner, she continued her post-secondary education while also teaching full-time. At the age of 50, she returned to SFU full time to achieve her “Professional Certificate” through the College of Teachers. In B.C, she taught in Fraser Lake from 1975 to 1981 and Lytton from 1981 until 1995. In 1995, she retired to the Okanagan.

She had several quiet passions, including her family, travel, and playing bridge. She traveled with a teacher friend, Gwendy Lamont, to many areas of the world. She also traveled with her bridge friends, Agnes Sweet, Barbara Dane, Loretta Marquis, Irene Reiger, and Shirley Cox (to name only a few) for a Baltic cruise and to Washington State. These trips always included time to play bridge in airport lounges, hotel reception areas, and at the tournaments; being the main purpose for the trips. She spoke very fondly of each of you and of these adventures.

Perhaps her quietest (also, not so quiet) passion was for dessert; in particular, chocolate. She taught her grandchildren an important life lesson they will never forget. “Make sure to check the dessert menu first”. The kids would always ask the question (and also, always knew the answer), ”Why, Grammy?” She would say with authority, “You have to plan your meal. If there is a special dessert, you must allow for it in the choice of your meal.” This conversation was repeated many times over the years and I have no doubt that it will continue for generations.

For her 91st birthday, she enjoyed one of her favourite desserts; the O’Henry Bomb – ice cream covered with nuts, caramel and drizzled with liquid chocolate. She had her eyes closed for much of the day, but… she opened her mouth for each spoonful until she was done!

She was also a member of The Canadian Federation of University Women and several book clubs.

Mom…Grammy… Margaret…, you are deeply missed! We know you continue to be with us each day. We also know… you are watching over us to ensure our meal orders are well thought out with the correct attention to priorities!

As a family, we together give our sincere thanks to the staff at Kelowna General Hospital 4 West, and Hospice House, for your exceptional care, compassion, and giving of yourselves to us during this very difficult time. We appreciate all you did for Mom, for us, and for all you do in our health care community for us all!

A celebration of life will take place at a later date.